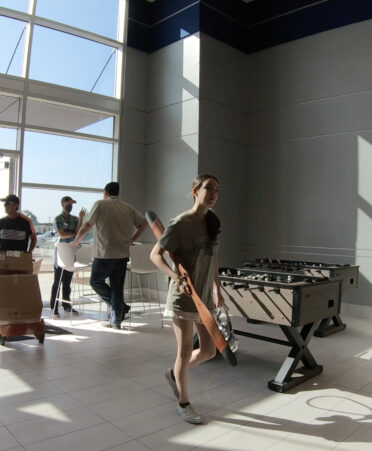 (WACO, Texas) – Dominic and Michael Ramos are excited about having their own rooms in the newly opened Griffith Hall residential housing at Texas State Technical College.

The twins from Kyle packed their cowboy boots, hats and gaming system and moved into their suite on Saturday, along with more than 200 other students who all started the new academic year on Monday.

“It just kind of worked out,” Dominic said about the twins becoming roommates.

Dominic is majoring in Welding Technology and picked up a passion for welding while in high school.

“I want to continue on to be the best I can be here,” he said.

Michael is majoring in Electrical Power and Controls and said he wants to work toward getting a job upon graduation at his dream company, the Lower Colorado River Authority. He said he also wants to enjoy the college experience while in Waco.

Jonathan Gonzalez, a Culinary Arts student from Midlothian, brought an air fryer and a computer to make his living space more comfortable.

“I didn’t feel like driving an hour to class. Plus, I want the experience of being a college student,” he said.

Gonzalez said he looks forward to building on his interest in cooking and hopes for a great job after graduation.

Nathan Love, of Copperas Cove, is a Cybersecurity student who said he enjoyed having his own space. He said he looked forward to sleeping in the adjustable-height bed. He chose to live on campus to be independent as he takes his classes online.

“It (cybersecurity) seems like a job that is going to be needed in the foreseeable future,” Love said.

Jeremiah Bland, TSTC’s Housing director, said the dormitory has already made a visual impact on campus. It was important for the building to be not only pleasing to the eye, but also functional starting on move-in day. Bland said his department worked with TSTC’s Physical Plant staff in the days leading up to the opening to make sure that toilets flushed and water ran through the faucets.

Construction began in August 2020 on the 246-bed dormitory. The building is named for Thomas Griffith, lead engineer and project manager for the historic suspension bridge spanning the Brazos River in downtown Waco.

The more than 98,000-square-foot Griffith Hall is between the Student Services Center and the Greta W. Watson Culinary Arts Center. The building has two entrances into a large foyer and interior hallways to suites with no kitchens, although each suite comes with a microwave and small refrigerator. Rooms are in combinations of one to two bedrooms and bathrooms. The dormitory has its own parking lot.