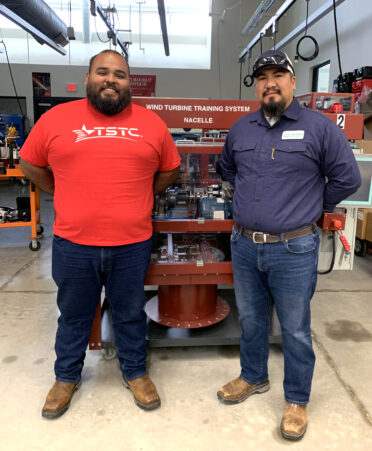 The program has captivated his interest with such topics as how a wind turbine system works, troubleshooting, and additional issues that may occur in the wind turbine.

“During my first semester, I had the course DC Circuits,” he said. “I enjoyed it because it explained the fundamentals of direct current, which included DC series and DC parallel circuits, and the possibility to troubleshoot a resistor or another component.”

While his education continues, the option to pursue an Associate of Applied Science degree in Wind Energy Technology becomes more appealing to him.

“My brother has suggested it will provide more opportunities as it did for him,” he said.

Guadalupe Valdez earned an Associate of Applied Science degree in Wind Energy Technology from TSTC in 2017.

According to Guadalupe Valdez, what makes Spark Power a great company is its potential for career growth.

“I have been part of the company’s growth since I started,” he said. “You will always learn something new here. I have taken many individuals under my wing. Each has excelled and gone further than I could have imagined. It brings me great joy to know I was their mentor.”

He added that his brother has great potential for his own future career path.

“In life, my brother Roy has overcome many obstacles,” he said. “I know those experiences will make him a great leader.”

Wind turbine service technicians can earn an average of $52,420 per year in Texas, according to the U.S. Bureau of Labor Statistics.TSTC offers an Associate of Applied Science degree in Wind Energy Technology, as well as a certificate of completion in Wind Energy Technician, at its Harlingen and Sweetwater campuses.