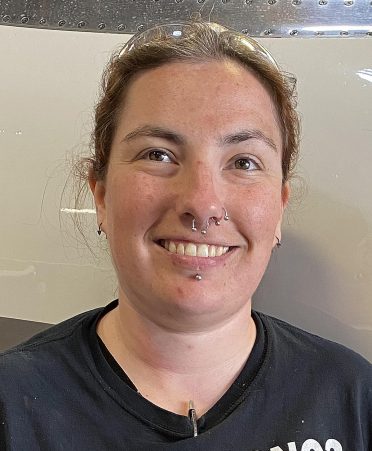 Cross’ dream of aviation career lives on at TSTC

That is when she enrolled in Texas State Technical College’s Aircraft Airframe Technology program. Cross, who works for American Eagle in Abilene as a ramper, has one year remaining to earn her certificate of completion from TSTC.

“At the age of 16, I decided I wanted to be a pilot. I wanted to fly the F-16s,” she said. “With my dad being in the Air Force, he helped me along the way, and I passed all of the tests. When I went for my physical, I found I was four inches too short. With my lifelong dream shot, I had to look for something else.”

Cross’ interest in becoming a coroner ended after two years in college.

“It would take me 10 years to complete school, and I did not want to be in school that long,” she said.

Her dream of working in aviation became a reality when Cross decided to work at Abilene Regional Airport.

“I wanted to go back to school and learn more to become a mechanic for commercial airline flights,” she said.

Her journey at TSTC has been rewarding.

“Things have been great for me. The instructors are great, and my classmates are great,” she said. “Working on the projects and the planes is the best part of the program.”

Cross also found herself being a role model to a high school dual enrollment student this past spring.

“It is good to have someone you can lean on for help during class and that will lean on you for guidance,” she said. “I did not expect that to happen, but it was great for both of us.”

Cross said she hopes more female students look into the program because it can lead to a satisfying career.

“It would be nice to see more females in the field. This is a growing industry, and gender does not matter,” she said. “At work and in class, I have the respect of everyone around me, and I respect those I work with and who are in my class.”

The need for aircraft mechanics in Texas is forecast to grow by 8% by 2028, according to onetonline.org.

Registration for the fall semester is underway. Scholarships are available. For more information, visit tstc.edu.