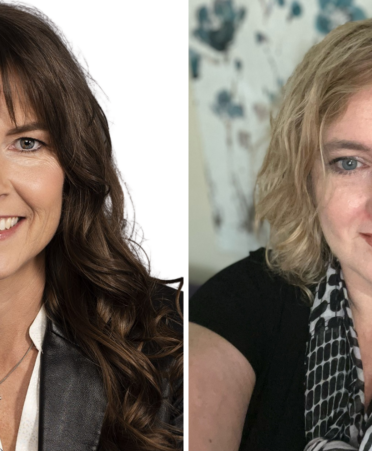 (ROSENBERG, Texas) – Two female Cybersecurity students at Texas State Technical College are using their training in the program as a means for change — and advancement — in their careers and lives.

Michele Reynolds, of Waco, anticipates that she will graduate this month, but this is not her first degree from TSTC. She previously earned a degree in TSTC’s Web Design and Development program and pursued a degree in mobile application development. Cybersecurity seemed to be an exciting next step to launch her from her job as an administrative assistant to a higher-paying career, she said.

“It’s a very diverse field,” she said. “There’s many different directions I can go.”

Reynolds is proud of all the challenging classes she has mastered during her time in TSTC’s Cybersecurity program, but her favorite moments are happening right now as she learns about penetration (or “pen”) testing.

“They call it a ‘white hat hacker,’ where you’re learning to hack a computer within the law,” she explained. “People that do pen testing will get permission from the companies to test the security of their network. They look for any way that an attacker can get in. That is exciting.”

Being a woman in a male-dominated field has never bothered Reynolds, who recalled that one of her favorite previous jobs was as a secretary with the highway patrol. She encourages women looking into the field of cybersecurity to “go for it,” especially as she thrives in a field that makes her dream of lifelong learning a reality.

“This is the perfect field for me because technology is always changing and growing,” she said.

Reynolds also wants everyone to understand that if she can pursue something new at midlife, so can they.

“I happen to be 53 years old, and I’m going into a new field,” she said. “Don’t be afraid to start fresh even after years of being in another field — even if you’re not a spring chicken.”

Carrie Hagglund, of Wolfe City northeast of Dallas, is in her second semester of TSTC’s Cybersecurity program. She once worked for a manufacturing company providing IT support but had grown as far as she could in the position.

Her father, who has a master’s degree in computer science, has been working in the computer and security fields for many years.

“We’re always talking about it and what’s going on with his job and things like that,” she said. “He was telling me before I jumped into the program that there’s a real need for people in the field. I thought, ‘Well, let’s see what it’s all about.’”

Hagglund appreciated that TSTC’s Cybersecurity program is recognized as a Center of Academic Excellence in Cyber Defense, signifying that it meets requirements set by the National Security Agency and the U.S. Department of Homeland Security. The designation resonates with Hagglund’s patriotism.

She has also enjoyed the program’s performance-based education model.

“I could still work and be able to go through the courses,” Hagglund said. “It was all online, kind of at my own pace, allowing me to work through it on my own time frame.”

TSTC’s instructors have been a big help in Hagglund’s training, she said. And while the cybersecurity industry may be male-dominated, she is not intimidated and encourages other women to consider the field.

“To me, it’s not about gender; it’s about job performance,” Hagglund said. “Don’t worry about being a woman. Go in, put your best forward, put in the work, learn it, and go from there.”

TSTC offers an Associate of Applied Science degree in Cybersecurity, an advanced technical certificate in Digital Forensics Specialist and an occupational skills award in Basic Cybersecurity.

In Texas, information security engineers can earn an average annual salary of $89,750, according to onetonline.org, which projects the number of positions in the state to grow by 20% through 2028.