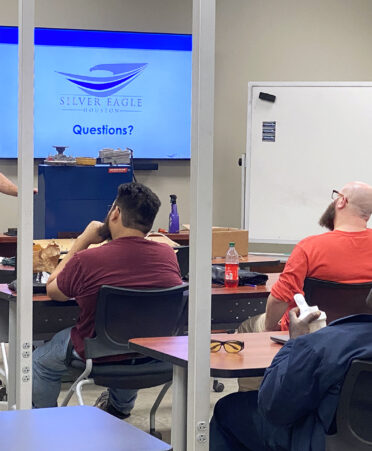 (ROSENBERG, Texas) – When John Farley, fleet supervisor of Silver Eagle Houston’s Pasadena branch, sees a resume that includes a work gap for school, it reminds him of himself.

“I was at my last employer for 10 years and decided that wasn’t going to do it for me,” he told a room full of Texas State Technical College Diesel Equipment Technology students on the college’s campus in Fort Bend County. “I needed more. I came to school here and started my career entirely over in my late 20s.”

The TSTC graduate returned to campus to tell current students about the potential opportunities available at his current company, Silver Eagle. He also attended the campus’ recent Industry Job Fair.

“This means a lot to me because I graduated from here,” Farley said. “I am actually a success story coming from here.”

Farley described his background, coming from humble beginnings and deciding to completely revamp his career path through TSTC. He switched gears to study Diesel Equipment Technology, seeing it as an opportunity to enter a lucrative, in-demand industry.

“When (Farley) called me to say that he was coming back to recruit, that just made my whole day,” Judy Cox, a placement coordinator with TSTC’s Career Services department, told the students. “That’s what we want to see. We want to see you all out there being successful and then being able to come back and share it with future graduates.”

After earning his degree, Farley worked hard, gaining experience at different companies before starting a career with Silver Eagle.

With locations in Conroe, Cypress, Houston, Pasadena and Rosenberg, Silver Eagle is the largest beverage distributor in the region, Farley said. He added that the company served 9,000 businesses across three counties and sold more than 36 million cases in 2021.

Farley discussed the perks of working at Silver Eagle, including information on benefits, tool and tuition reimbursement, company culture and more.

TSTC Diesel Equipment Technology students fired questions at Farley, covering everything from what a typical day on the job looks like to whether they could use him as a reference in applying to open positions with the company.

“I’m really impressed with what I see,” he said.