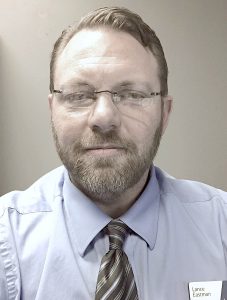 “I really like our mantra, ‘Place Texans in great-paying jobs.’ It’s simple. We have really worked hard to live up to our mantra,” he said.

Eastman, who was named interim provost in May, is working with the college’s leadership, faculty and staff on a competency-based learning schedule for students. He is no stranger to the learning approach because it was used at his previous place of employment, Davis Technical College in Kaysville, Utah.

“At TSTC, we are working to have flexibility and to allow students to schedule classes around their life. Studies have shown that it works,” Eastman said. “With this type of program, retention is much better.”

Prior to arriving at TSTC more than two years ago, Eastman served as director of the manufacturing and transportation programs at Davis Technical College. He also taught an industrial maintenance class.

His love for electronics came while watching “Star Wars: Episode V – The Empire Strikes Back.”

“Seeing Luke Skywalker’s hand got me into electronics,” he said of the movie scene in which Skywalker’s missing hand is replaced with a robotic one.

Eastman once worked in the private sector in industrial maintenance. But when a teaching position opened, he turned to educating young minds.

“Teaching is nothing more than transferring knowledge,” he said. “I am the kind of person who would want to put a button on something to try and make it work. I want to pass that knowledge on to others.”

He learned about TSTC through a job posting showing an opening for the vice president position. He had confidence that he would be picked, telling his wife, Beckie, that he was going to apply for the job and his family “will move to Texas.”

Eastman said during the entire interview process, he remained confident that he would be selected for the position.

“I kept telling my wife they are going to hire me,” he said.

Since his hiring, Eastman said he has been welcomed by not only the TSTC family, but also the Abilene community. His oldest daughter, Sydney, recently completed a church mission in Idaho, and his youngest daughter, Brooklyn, is a senior at Wylie High School in Abilene.

“I love the people of Texas,” Eastman said, admitting that his only stop in Texas prior to an in-person interview at TSTC was a flight layover in Dallas. “This is a fantastic place to live.”

In his spare time, which he said he does not have much of, Eastman enjoys fishing, gardening and church activities.

“My wife and I have also spent a lot of hanging with the kids and their friends. They like to play cards with us because they think they can beat us,” he said with a laugh.

January 19, 2022
Dirickson always knew that TSTC was in his future
January 14, 2022
TSTC students, staff excited to be back on campus
January 12, 2022
TSTC Industrial Systems student plans to continue family businesses