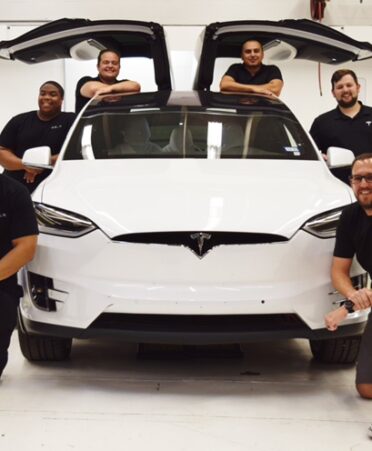 The TSTC students began the 12-week training program in May to learn the skills necessary to become advanced electric vehicle technicians at Tesla. As a Tesla-paid hourly intern, the students developed technical experience and earned certifications through a blended approach of in-class theory, hands-on labs and self-paced learning.

The program’s classes are held at the Kultgen Automotive Center on TSTC’s Waco campus. Job shadowing is also done at Tesla Service Centers in the Austin and Dallas-Fort Worth areas.

“We are excited and proud of the fourth graduating class from the Tesla START program in Waco,” said Adam Barber, TSTC’s executive director of Workforce Training for the East Williamson County, North Texas and Waco campuses. “We look forward to the next class and continued partnership with Tesla.”

Brandon States, a Tesla START program instructor, said being able to teach the students helps him learn more about the Tesla experience.

“It’s been totally awesome,” he said about the fourth cohort. “It’s been satisfying seeing the success and being able to see them get placed.”

States and Roberts are both graduates of Brigham Young University-Idaho’s Automotive Engineering Technology program, with Devlin finishing up his bachelor’s degree with online classes. Devlin said he learned about the Tesla START program from Roberts, with both of them later attending a recruiting session on their campus.

Devin said he admires Tesla because the company has made electric vehicles cool to consumers.

“I thought this was a great opportunity to get in with Tesla,” he said. “It’s the future, and it (the program) will set you up for a great future.”

Huron said he learned about the program from his brother, who read about it through online research. Huron already has an automotive technology – diesel certificate and has experience working at an Audi dealership.

Huron said the Tesla START program appealed to him because he was feeling burned out. He said learning about all things Tesla has rejuvenated his career.

Huron said he admires the low maintenance costs of Tesla-made vehicles. And, he said he is eager to see how Tesla can help change the environment for the better in upcoming years.

The graduates are going to Tesla Service Centers in Plano, Texas; Salt Lake City, Utah; and Tulsa, Oklahoma. One graduate will be working at Tesla’s Gigafactory in Austin.

There are currently seven other Tesla START partnerships with colleges in California, Florida, New York, North Carolina, Ohio and Washington. The program launched in 2019 and has had more than 300 graduates to date.