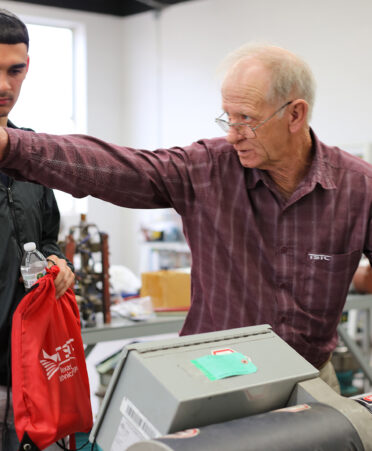 The Sweetwater campus opened its doors to students to discuss career options through the various programs available at TSTC in West Texas. Faculty from the Breckenridge and Abilene campuses were in attendance to highlight programs offered there.

“It was a tremendous turnout for our first open house in two years,” said Daniel Martin, TSTC’s director of student recruitment in West Texas. “It was great to have representatives from our programs that are offered online available to talk to students.”

Martin said high school teachers and counselors were impressed with the open house and tours.

“They were able to have the opportunity to see what is available at TSTC,” he said. “They can go back and tell other students what we have available.”

The high school students also were impressed with what they were able to experience. Joeangel Reyna, of Sweetwater, was able to visit the Wind Energy Technology labs to see what he will be learning beginning in the fall. Prior to the open house, he had already decided to enroll in the program.

“I am excited to get started,” he said. “I have liked what I have been able to see in the labs.”

He had a good first impression of the instructors, including Russell Benson, who provided a tour of the labs.

“He really impressed me,” Reyna said. “I know there are some great instructors here and look forward to learning from them.”

Martin Rodriguez, of Haskell, plans to attend the Waco campus to study Auto Collision and Management Technology. He said each program available in Sweetwater offers students a future.

“Every time I went to a different program, I was impressed,” he said. “All of the technology available to students is cool. The environment is also great to learn in.”

Brittany Andrews, of Haskell, is no stranger to TSTC. She has competed in several welding competitions at different campuses, including Sweetwater. She used her time on campus to see what she could possibly be doing when serving in the U.S. Marine Corps.

“I enjoyed talking to the instructors in automotive and diesel,” she said. “When I am in the Marines, I may have to work on some of those things. I took the time to learn some things about the vehicles.”

Monty Moeller, who teaches welding at Rolling Plains Technical School, brought several students to tour the campus. He wanted his students to be exposed to different career options.

“The exposure of the many programs available at TSTC is what is important,” he said. “Students can come here and learn about automotive or wind. They have their eyes open to many options.”

TSTC instructors also noticed a trend during the open house.

“A lot of the students’ parents were here and asking questions,” said Cody Davis, an Electrical Power and Controls instructor in Abilene. “They also seemed interested in what we have to offer.”

Terry Steelman, who teaches Industrial Systems in Abilene, said the students were engaged throughout the event.

“They asked us a lot of questions and cared about what we are offering them,” he said.

TSTC will host an open house for high school students at its Industrial Technology Center in Abilene from 9 a.m. to 2 p.m. Friday, March 25.