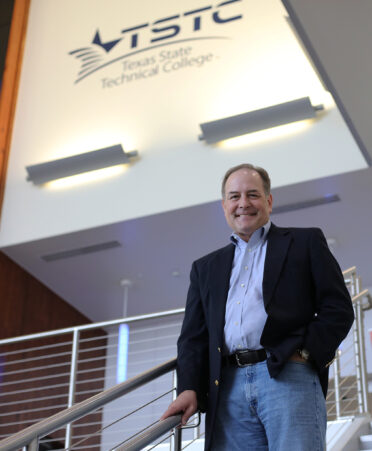 “As a respected and trusted member of the community, John Kennedy brings with him a blend of leadership abilities perfectly suited to the TSTC vision,” said Jeff Kilgore, TSTC vice chancellor and chief academic officer. “He played an instrumental role in helping develop TSTC in Fort Bend County. John is willing to do anything for TSTC and our students.”

Kennedy began his career at TSTC in 2014 with The TSTC Foundation.

He worked closely alongside former provost Randy Wooten prior to TSTC breaking ground at its current location in Fort Bend County in 2015 — and beyond.

“We made a lot of relationships throughout Fort Bend County and the Houston area,” Kennedy said. “It’s been a great run being in fundraising. I’m ready for the next chapter.”

“It just seemed like the right fit,” he said. “I will still do my best to help TSTC’s reputation in the community.”

Kennedy looks forward to the chance to work more closely with TSTC students and faculty in pursuit of fulfilling the college’s mission of placing more Texans in great careers.

Some of his favorite moments at TSTC include a meaningful step along the path of that mission: commencement celebrations.

“Seeing the graduates cross the stage and being able to shake the students’ hands and having that moment is wonderful, but then the big payoff comes when they’re with their families after — and the tears of joy,” Kennedy said. “It is so moving to me to see that every semester. It does not get old.”

Bowling added that he and Kennedy see eye to eye and can work seamlessly together.

“We’re wired very similarly,” Bowling said. “We can both support each other perfectly. The batteries are included and there’s no assembly required. He’s ready to rock.”