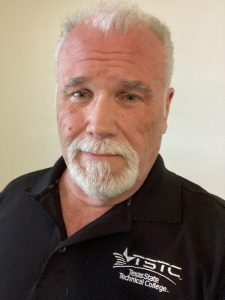 (WACO, Texas) – Glenn Zgabay has seen a lot in his more than 40 years of working at Texas State Technical College.

“It’s rare nowadays to see someone’s career span over 40 years with the same employer,” said Nick Alvarado, TSTC’s vice president of Communication and Creative Services. “Glenn has been a strong foundation to our team with his technical experience and historical knowledge. We are truly grateful for his dedication to TSTC.”

From the evolution of technology, to a college name change in the 1990s, to buildings torn down and new ones erected, Zgabay is a walking history of the college. But at the end of January, he will retire from his position as a publication specialist in TSTC’s Creative Services department.

“I worked with so many wonderful people during my tenure here at TSTC, that it would probably be impossible to list them all and unfair to try,” Zgabay said.

Jan Osburn, a former executive director of Creative Services at TSTC, worked with Zgabay for about 30 years. She remembers his working with a paste-up board for designs and trips back and forth to the print shop to work with staff to produce camera-ready pieces.

Eventually design work became digitized, and Zgabay had to keep up. Osburn said he was great with Adobe Photoshop but also worked with Adobe PageMaker and QuarkXPress. He also contributed his skills to helping produce TSTC’s former student newspaper, the Tech Times.

“Other than being talented and skillful, Glenn is a kind person, but he has a dry sense of humor,” Osburn said.

Caitlin Hooks, interim assistant director of Creative Services at TSTC, had an office next door to Zgabay’s at the Provence Graphic Communications Center on the Waco campus.

“Although I have only worked alongside him for the last five years, I can say that Glenn has always come to my office with a smile and ready to work,” Hooks said. “He is always willing to take on difficult projects and never complains. I have never seen Glenn stressed out or upset. He is generally an easygoing and happy person to work and be around.”

Zgabay was born in Waco.

“My father worked at James Connally Air Force Base and had been an aircraft pilot. So naturally when I was very young, I wanted to be a pilot,” he said.

Zgabay graduated in 1976 from the Commercial Art and Advertising program at what was then Texas State Technical Institute (TSTI) and eventually became TSTC.

“I’ve always liked to draw and have been interested in art,” he said. “I was attracted to artwork relating to fantasy, science fiction, surrealism — the type of artwork seen on many album covers, movie posters and book covers.”

During his time at TSTI, he was a work-study student in the campus Public Information and News Office and did a paid summer internship at Southwest Advertising, an agency that was in downtown Waco’s ALICO Building. After graduation, he worked at the agency for about a year before being hired at TSTC as a graphic artist in February 1977.

“My career in this field spans over 44 years,” he said. “One of the biggest changes in commercial art production has been the introduction of personal computers, and what we referred to at the time as desktop publishing. The advent of this liberating change revolutionized the profession.”

What has kept Zgabay at TSTC is its mission to educate Texans to get great-paying jobs. He said TSTC’s contribution to the 10 Texas cities that have campuses and to the state is essential.

“Being a graduate of the college, I have felt a personal bond and kinship with our students,” he said. “Working in Waco, and being close to my and my wife’s families, was also a major factor.”

“I have enough plans to keep me busy for years, and they will definitely include artistic endeavors of various sorts.”