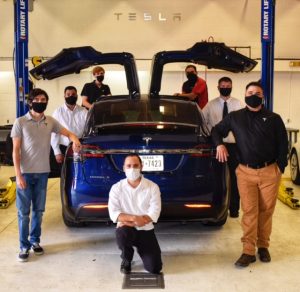 The TSTC students began the 12-week training program in August to learn the skills necessary to become advanced electric vehicle technicians at Tesla. As a Tesla-paid hourly internship, the students developed technical expertise and earned certifications through a blended approach of in-class theory, hands-on labs and self-paced learning.

The program’s classes are held at the Kultgen Automotive Center on the Waco campus.

“We are excited and proud of the second graduating class from the Tesla START program in Waco,” said Adam Barber, TSTC’s interim executive director of Workforce Training in Waco. “A couple of students are previous TSTC graduates, so that’s especially cool. We look forward to the next class and continued partnership with Tesla.”

“These guys worked very hard, and they all got placed in good locations,” said Mark Tosto, a Tesla START program instructor.

Waco’s second cohort started work at their assigned service centers in November. Butler is working at Air Impressions in Waco as an aircraft mechanic.

Dawe split time growing up between Great Britain and Colorado and had an early interest in the environment and renewable energy. He learned about the Tesla program from YouTube.

Some of Dawe’s favorite times in the program were shadowing workers on Fridays at Tesla’s service center in Dallas, and he and Abel working five days in Alabama in September during a company battery-charging project. Dawe said they helped charge batteries on hundreds of Tesla vehicles ready to be shipped to stores nationwide. Dawe and Abel also traveled to Nashville, Tennessee to deliver batteries.

“It was awesome to be thrown in the fire,” Dawe said.

Naffaa was born in Lebanon and came to Texas in 2014. He enrolled in 2018 at TSTC’s Waco campus to study Automotive Technology. He graduated with the program’s associate degree earlier this year.

Naffaa said his time at TSTC combines his passion for cars and his family’s interest in his study of engineering.

“I learned a lot here,” he said. “I learned how the car works and about the functional parts. I also learned about the suspensions.”

There are currently seven other Tesla START partnerships with colleges in California, Florida, New York, North Carolina, Ohio and Washington. The program launched in 2018 and has had more than 300 graduates to date.

The program’s 2021 cohorts in Waco are full, but interviews for 2022 cohorts are scheduled to be held later this year, Tosto said.