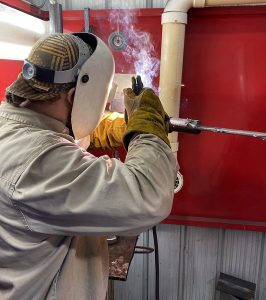 Students have been completing labs in preparation for entering the workforce when they receive their certificates. But the work does not stop once the torches are laid down.

For Ethan Hammond and Zane Fitch, a career path has been blazed.

“TSTC has helped me with more than just learning to weld things. They have helped me write a resume and given me advice on how to approach job interviews,” Fitch said. “I know what to expect during a job interview, thanks to the people at TSTC.”

That knowledge was one of the reasons Hammond chose to attend TSTC. The Cisco native said having someone help in the job interview process was important.

“Because of TSTC, I have my resume built right now,” he said.

Fitch said he first found interest in welding while helping his brother-in-law on a job site. He said TSTC was the route he wanted to take because of the hands-on training.

“I decided that I wanted to go to school and get a certificate. I knew that would open up more job opportunities for me,” he said. “The hands-on approach offered here is great for us. We are able to learn things and put our knowledge to use.”

Hammond has already put some of his skills to use by welding barbecue pits. He knows that this career path will benefit his family in the long run.

“This is a career in which you can actually work for yourself,” he said. “I have done that with some projects after class.”

Instructor Stephen Hope said his goal is to see the students succeed.

“It has been exciting to see all the students come in and know little to nothing about welding. To be able to help them understand the fundamentals and see the students succeed is such an amazing goal,” he said.

Hammond said the Breckenridge campus has the perfect learning environment for future welders.

“We have 30 (welding) bays here, and it runs efficiently,” he said. “Our class is small, but the work we do pays off. I think people interested in a welding career should consider coming here.”

Hammond was drawn to the Breckenridge campus because it offered the program in a small town like his hometown of Cisco.

“This is a nice campus for the community. I wanted to go to a smaller campus, and this was the one that caught my attention,” Hammond said.

Hope said he appreciates the work the students put in and knows the ultimate goal is at the end of the program.

“Working for TSTC has been such a wonderful experience. The greatest part is being able to watch the students graduate and pursue their new careers,” he said.