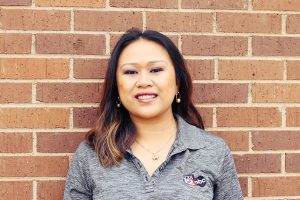 (ABILENE, Texas) –  If you asked Prissa Delostrico three years ago if she thought she would be working at a television news station today, she never would have considered it an option. Now, she doesn’t plan on leaving anytime soon.

Delostrico is a Texas State Technical College Computer Networking and Systems Administration alumna. She graduated in December 2017 and now works as an information technology engineer for KTXS-TV News.

“I never imagined I would be working for a news station when I started my degree at TSTC, and I was nervous at first. But, I’ve been at KTXS just over a year, and I love it because it’s exciting and really fulfilling,” Delostrico said.

Delostrico was always interested in computers and recognized the importance technology plays in everyday life.

“Technology is the future, and I knew I could find a job in that field if I could get a degree in it,” she said. “Any business or organization that uses technology needs IT, and at KTXS I maintain the broadcast equipment, service our machines, care for our computers, laptops — anything I can do to help.”

As important as it was for Delostrico to get a degree in a lucrative career field, it was also important to find a college that was flexible with her schedule and could accommodate her needs.

“I was a stay-at-home mom, so I needed help with child care. TSTC helped me figure that out, as well as offering counseling services for me when I went through some hard times,” Delostrico said.

One person who truly stood out to Delostrico was her instructor Renee Blackshear.

“It was awesome to have a female instructor because it is a male-dominated industry, but she was a great mentor and role model,” Delostrico said.

For Blackshear, Delostrico was a model student.

“Prissa Delostrico is a wonderful woman and a student any instructor would be honored to work with. She is insightful, works hard, accepting of any challenge, and determined to overcome any obstacles that may come her way,” Blackshear said. “I look forward to many things to come for her.”

One of Delostrico’s greatest motivators to succeed was her goal to be a role model for her daughter.

“I wanted to show my daughter that she can do anything she puts her mind to. It doesn’t matter if she chooses a career that is male-dominated or not — she can do it,” Delostrico said.

As a nontraditional student, Delostrico knows how difficult it can be to take the step to go back to school, but she encourages everyone to give it a chance.

“Go on campus at TSTC and talk with the instructors, counselors and career people because you’ll be surprised by how much they want to help you and see you succeed,” she said.

Delostrico, an Abilene native, graduated from Cooper High School in 2005.

Registration for the fall semester is underway. For more information about TSTC and the many programs offered, go online at tstc.edu.