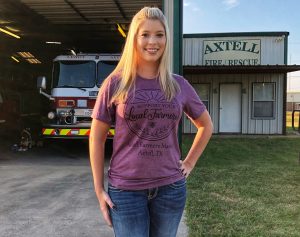 (WACO, Texas) – Amanda Ruble has quickly put her fundraising and marketing skills to good use for the betterment of Axtell, an unincorporated area of McLennan County.

“It does not have a big-city feel,” she said. “We have a good school district out here.”

Ruble, who grew up in Gatesville, is a 2017 graduate of Texas State Technical College. She took online classes to earn an Associate of Applied Science degree in Business Management Technology.

“I am extremely proud of the young woman Amanda has grown into,” said her mother Sherri Ruble, an instructor in TSTC’s Computer Networking and Systems Administration program in Waco. “She has always been goal-oriented. I know that once she sets her mind to do something, she will.”

Amanda Ruble was a marketing director when she was laid off in March. She now has businesses at her home selling candles and shirts.

The idea for Axtell’s farmers market came from an item on an Axtell-focused Facebook page. People thought it would be a great idea for those who grew vegetables to gather and sell them.

Amanda Ruble thought about the idea and decided to take the lead for residents. She started a Facebook page for the Axtell Farmers Market and Trade Days and asked Leroy-Axtell Fire and Rescue’s fire chief to allow the market to set up on land next door to their building.

Amanda Ruble learned the 20-member volunteer force needed a new Jaws of Life to enable them to answer emergency calls. She decided all proceeds from the farmers market would go toward this purchase.

“We have two deadly intersections out here, and people wreck all the time,” she said.

The first farmers’ market in July yielded more than $600 in donations. Eventually the younger Ruble was able to raise $15,000 with farmers markets held twice a month starting in August.

In late September, she had a meeting via video conferencing with representatives of Daniel Stark Injury Lawyers in Waco to discuss the Jaws of Life project. Ruble said she was surprised when the law firm offered to contribute $15,000 to enable the volunteer fire department to make the purchase.

Billy Brown, the Leroy-Axtell Fire and Rescue’s assistant fire chief, said the effort brought residents together. He said the volunteers found out through a group text about all of the Jaws of Life funding being raised.

“It’s great to know there are still kind-hearted people out there,” Brown said.

Ruble’s next goal is to raise money for a park for residents. The park is planned for the land the farmers market takes place on.

“We need something here,” she said.

The Axtell Farmers Market and Trade Days are held from 9 a.m. to noon on the first and third Saturdays of each month next to the Leroy-Axtell Fire and Rescue’s building. The last event of the year will be held Dec. 19. The event will restart in the spring. The market adheres to Centers for Disease Control and Prevention and McLennan County health and safety guidelines for COVID-19.