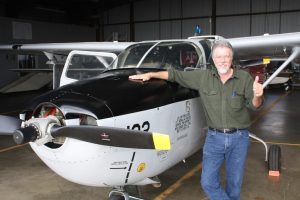 (WACO, Texas) – Not everyone can claim to have received a U.S. patent.

Last year, he and his team at Texas A&M University were awarded U.S. Patent 9,957,035 for Un-Manned Aerial Vehicle Having Adjustable Wing Module, Tail, and Landing Gear, according to the U.S. Patent and Trademark Office.

“I was able to use my experience as an airplane mechanic and working with airplanes to actually put the airplane together,” Rhodes said.

After studying aviation maintenance and receiving his airframe and powerplant licenses from TSTI, Rhodes moved to College Station to attend Texas A&M University but found that his credits would not transfer.

“I do think it’s kind of neat that I came here to take aerospace engineering and then ended up here working in the department as a staff member,” Rhodes said.

Rhodes started to attend Blinn College but decided to seek full-time employment instead. He began working for the Texas Highway Department (now Texas Department of Transportation) as a mechanic, but he also worked part time on airplanes.

“I always had that desire to work full time on airplanes, and the opportunity came up in ‘99 to work for a company (Avlink) that had a fleet of jets,” Rhodes said. “So that was really appealing to me.”

Rhodes worked for Avlink for one year until the company went out of business. He then worked for Z Jets for five years.

“One of my fellow aviation buddies told me that A&M was starting a flight research lab, and they had an airplane over there and they wanted someone to come look at it,”

Rhodes said. “So, as fate would have it, I came over and worked on the airplane a couple times.”

“I’ve always hired my own technicians, and he is by far the very best,” Saric said. “He has a multitude of skills. But the main thing is that he enjoyed doing new things and learning new things.”

“I’m a support person with mechanic experience,” Rhodes said. “I’m the technical support, the bridge between what they want to do and how they get it done.”

One of those former students at Texas A&M University, Andrew Carpenter, learned about the maintenance and regulation aspects of the aviation industry from Rhodes.

“He’s always had a great attitude, regardless of what he’s doing,” Carpenter said. “He helped out whenever he could, and he was a good mentor.”

Rhodes loves his job and is excited to continue working for Texas A&M University.

“For right now, I’m just gonna keep doing what I’m doing. I get a huge satisfaction from the people I work with,” Rhodes said. “I couldn’t ask for anything better.”