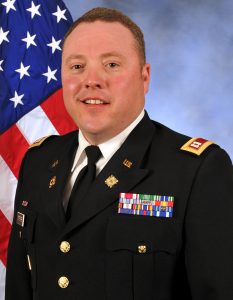 (SWEETWATER, Texas) – Gerod Strother has worked on all types of vehicles.

Strother, a 21-year veteran of the U.S. military, brings that experience to Texas State Technical College as an Automotive Technology instructor. After retiring from the military, he began working at the Sweetwater campus in January.

His experience in the military included service with the U.S. Air Force and U.S. Army.

“I experienced the highest of highs and the lowest of lows in the military,” Strother said.

He said the moment he remembers the most was during Operation Enduring Freedom, America’s response to the 9/11 terrorist attacks.

“I was part of the first military action in Afghanistan. I loaded the bombs on the first aircraft that were going to bomb Afghanistan,” Strother said. “For a guy from small-town Andrews, Texas, I knew then I was, for the first time in my life, part of the big time.”

Strother’s first job in the Air Force was as an aircraft electrician on B-1 bombers. He also performed vehicle maintenance at several bases and served as an Air Force recruiter in Abilene.

He said one of the more unique jobs was working on a Tunner 60K Cargo Aircraft Loader, which is used to load pallets on large aircraft.

“It is the size of two or three cars,” he said. “It took a special school to learn how to operate it.”

After his time in the Air Force, Strother switched his focus and attended officer candidate school at Fort Benning, Georgia. His Army career led him to several locations, including Fort Bliss, Texas; Fort Lewis, Washington; and Fort Polk, Louisiana.

While in the Army, Strother was deployed to Afghanistan for a second time but returned home for additional officer training. While in the military, he worked on earning a bachelor’s degree and a master’s degree “without having to pay any money.”

“(During) my time in the military, I met some really good people,” Strother said.

His service has already helped him in his short career as an educator.

“I knew that I would have to deal with different types of people. I did that for 21 years,” Strother said. “I also learned from different people that there is more than one management style to use.”