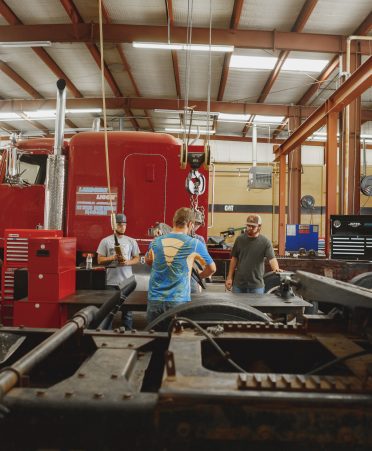 During his 17-year military career, Jordan was a welder. After retirement, he tried his hand at various jobs in the Austin area.

“It was not a good fit for me,” he said of a career in welding.

He knew Texas State Technical College offered various skilled workforce programs and decided to enroll in Diesel Equipment Technology. Now he is a candidate to receive an Associate of Applied Science degree this month.

“While I was in the Navy, I worked around a lot of diesel and big equipment,” he said. “I was never part of the mechanical end but was an operator. I decided to learn more about it.”

Jordan was also pushed toward the diesel field by a neighbor. His neighbor knew the importance of diesel mechanics in Texas. According to onetonline.org, the need for diesel engine specialists in Texas is expected to grow by 14% by 2028.

“My neighbor works for an oil company as a diesel technician and makes really good money. His company flies him everywhere to work on generators,” he said. “He said I should check the field out because you never know what will be needed in the future.”

Jordan took the advice — and his military knowledge — with him to class. What he found was a new world of learning.

“I was familiar with some of the equipment, but I was surprised with the new technology,” he said. “I consider myself to be mechanical in nature. That lifestyle suits me because I like to see how things work.”

The hands-on approach to learning was Jordan’s best experience.

“You can’t teach on a computer basis only. You need to have that mock-up like we have in the lab,” he said. “You need to be able to go in and touch, look and even smell the problem. You have to rely on your instincts and not just a computer.”

TSTC has been a tradition in Jordan’s family. His grandfather was an instructor in the building trade program in the 1970s, and his father was a Diesel Equipment Technology student.

“I always knew TSTC would be a source of knowledge for me,” he said.

Jordan initially wanted to become a welding instructor to pass his knowledge on to the next generation. He earned an associate degree in welding from TSTC in East Williamson County, but he could never get a teaching position.

“I decided to return to college and enrolled in the diesel program, thinking it would put another notch on my belt,” he said. “I knew another degree would look good on my resume.”

Jordan has not given up on a teaching position. He said having TSTC Career Services helping him with his resume and interview skills will help him in the future.

“Career Services has helped me with my resume and what I have been doing wrong,” he said. “Having someone helping me with the little things like that is a great resource.”

Jordan said military veterans should look into the different opportunities at TSTC.

“(TSTC offers) so much help to veterans and all of their students. TSTC is helping me in different ways, and for that, I will be appreciative for a lifetime,” he said.