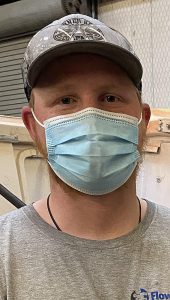 Perry’s decision to attend TSTC based on helping family

(SWEETWATER, Texas) – Growing up on a farm in Jacksboro, Kenneth Perry was constantly repairing equipment.

When it was time to choose a career path, Perry said he had two career options, and both included Texas State Technical College.

“My school counselor told me about TSTC’s programs. It was either going to be diesel or airplanes,” he said. “Anything that had a motor, I liked to work on it.”

His decision, in part, was made on the farm. The family 18-wheeler became his, and he decided to enroll in the Diesel Equipment Technology program. He is currently studying for an associate degree he can use on the farm and later in life.

“I wanted to be able to work on the farm and help my dad,” Perry said. “I also like the small environment we have in Sweetwater.”

While Perry has been used to working on trucks and tractors, he admitted that some areas still give him issues, especially the lab sessions’ transmission portion.

“There are so many moving parts. If you put it together wrong, you will not know it until you are done,” he said. “There is more tedious work when it comes to the transmission, so you have to pay attention.”

Perry said having instructors who have been in the field has helped him improve his skills.

“The instructors want you to figure out what is being done wrong before they come in and help,” he said. “They have set this up so we can learn all of the details.”

Perry does not know what his long-term plans are, but he knows he will put his knowledge to use helping his father on the farm.

“I will go home and drive the diesel and work on things for my dad,” he said. “I know that I will be able to work on our tractors and trucks. I will also be hauling hay and anything else for my father.”

Perry also knows that having a degree will help him when he does begin looking for a career.

“I am going to be prepared for work. Having a degree will be important, and TSTC is known for having graduates hired,” he said.

“Companies are always looking for good people to work on their trucks and equipment,” Weir said. “The best thing is many companies trust our graduates.”

With oil prices increasing, Weir said more companies will begin looking for employees. According to onetonline.org, the need for diesel engine specialists in Texas is expected to grow by 14% by 2028. That forecast is higher than the national growth of 3%.

Perry said he is pleased that he decided to make working on heavy equipment a career.

“This decision set me up for a lifetime,” he said. “I am happy to be learning a skill that will help my family.”