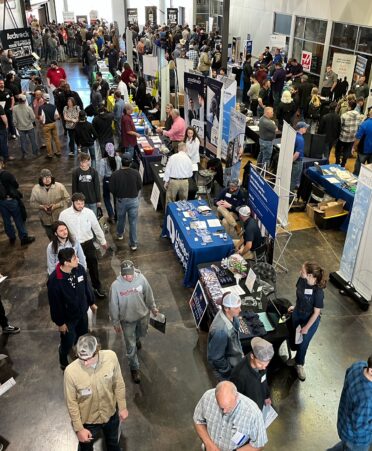 For the first time, the event was spread out on the Waco campus to include the Col. James T. Connally Aerospace Center, the Industrial Technology Center and Murray Watson Jr. Student Recreation Center. More than 100 companies were represented at the event.

“The student participation was wonderful,” said Hannah Luce, director of planning and special events for TSTC’s Career Services department. “We had a good variety of companies here, some for the first time. Some companies interviewed students on-site.”

Matthew Tabor, a planning and scheduling supervisor for facilities and maintenance at Samsung Austin Semiconductor, said the company was seeking to fill positions in fabrication, HVAC and engineering. He said while the company has a lot of senior-level positions filled, it is challenging to find qualified younger employees.

“It’s been really good,” Tabor said about the event. “We have gotten several resumes from people.”

Jeff Caraway is project manager for the testing group at POWER Engineers, which has offices in Austin and other Texas cities. He said he was interested in talking to students studying Drafting and Design, Electrical Power and Controls, and Instrumentation Technology.

“I like meeting the students and talking to them about their education and what they want to do,” he said.

Caraway and other company staff are already familiar with TSTC because of the partnership with the college’s statewide Electrical Power and Controls program.

Students were eager to talk to companies in a face-to-face environment.

Alexander Fahrenthold, of Bastrop, is a Welding Technology student scheduled to graduate in June. His goal for the event was to learn about current job openings. The companies that Fahrenthold said he was interested in include Flex, Phillips 66 and Samsung Austin Semiconductor.

“It’s been very educational and eye-opening,” he said. “I have enjoyed talking to everyone.”

The event was also open to TSTC alumni.

Ethan Eppinett, of Taylor, graduated in 2021 from TSTC’s Welding Technology program. After graduation, he said he took the easiest, best-paying job he could find, but knew he needed to find a long-term career.

Eppinett gave nine resumes to potential employers at the event and said he was impressed with PMG Inc. and Samsung Austin Semiconductor. His questions focused on the benefits that companies offer, along with the work they do. He said he wants to stay in the Austin area to work.

TSTC’s Waco campus plans to have another Industry Job Fair for students and alumni next fall.