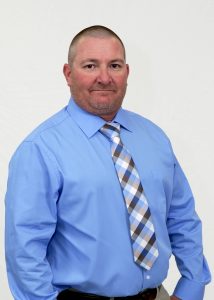 (ROSENBERG, Texas) – Troy Eads is only two years in as the Electrical Lineworker Technology instructor at Texas State Technical College, but he is already making a lasting impression on his students and colleagues, earning him a 2019 Chancellor’s Excellence Award.

“When I received notification about the award, I had no idea what was going on or what this award meant,” said Eads. “It was definitely a surprise and after learning more about its meaning I am honored to have been thought about so highly by those I work with.”

The Chancellor’s Excellence Award has celebrated employees who exhibit TSTC’s core values of Excellence, Accountability, Service and Integrity for nearly the past two decades.

To receive this award, TSTC employees are nominated by their peers, provosts and vice chancellors, and are chosen for their distinguished service, commitment and dedication to the college, communities and their state for this award.

“The teammates who win this award model excellence for us all and are recognized for both their sound character and for advancing TSTC’s new direction,” said TSTC Chancellor Mike Reeser.

“Due to their caring and dedicated efforts, TSTC continues to make a difference in the employment success of our students.”

Eads was selected among 160 faculty and staff members who were nominated and is one of 35 recipients statewide.

Eads arrived at TSTC with extensive experience as a lineworker and employee for American Electric Power (AEP), where he worked for nearly two decades.

At AEP, Eads learned the trade with eight years of AEP school to hone his skills.

“I was 22-years-old when I got to AEP. I had other odd jobs, but this was my career,” said Eads. “This is what I love, where I grew up, but the demands of the job got to me when I hit my forties.”

It was during this period when Eads began looking for something not as tedious, but still doing what he loved.

That’s when he found TSTC and the available instructor position.

“As soon as I set foot on TSTC grounds and I met my supervisor Eric Carithers, it felt like home,” said Eads. “This is where I was supposed to be.”

Despite other interviews Eads had at the time, his heart was set on TSTC.

Eads said he is proud to have been a part of helping the Electrical Lineworker Program grow in the Fort Bend County and Houston area.

“A lot of work and hands went into making this program what it is,” he said. “It was brand new when I came on board. We’re watching it grow and, even better, watching our students grow and gain careers.”

Eads said it’s hard to believe how far he has come, since asking a meter reader one day about his job and taking a leap of faith by applying to AEP with no experience.

“I don’t recommend students get into the career the way I did,” he said. “What took me eight years of training, takes only two years here at TSTC. Plus you get a technical degree, which in the long run leads to more opportunities.”

Eads will be honored in May at the National Institute for Staff and Organizational Development (NISOD) awards dinner and celebration in Austin where he and the other Chancellor’s Award recipients will receive their medallions and honors.