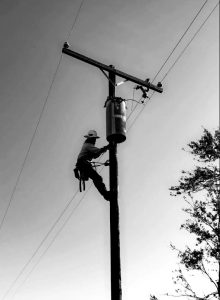 (WACO, Texas) – Colton Machart said growing up in Shiner instilled the work ethic he has today.

“I was always outside,” he said. “I would haul hay in the summer, build fences and things like that.”

“It has been a long time coming, but I am happy that it is over,” he said. “It is a bittersweet moment. I made a lot of good friends at TSTC.”

“He has chosen this field to make his career, and when someone with his previous accomplishments decides to do something, they usually get it done,” Mitchell said. “There is no doubt in my mind that he will be successful.”

Machart started this month as a power crew intern at Oncor in Round Rock. After a four-month probationary period, he hopes to become an apprentice, a step forward in becoming a journeyman lineman.

“I am excited, but everything is moving so fast that it is hard to take it all in,” he said. “I am definitely ready for the next chapter and to finally have a good job and go support myself.”

Machart is a graduate of St. Paul High School in Shiner. He played football at Abilene Christian University, where he was studying engineering and business when he realized an office job was not for him.

He moved back to Shiner and worked part time as a helper for a power line contracting company. He said he enjoyed being outdoors and working with his hands.

“That is when I realized I thoroughly enjoyed the field and everything that comes with it,” Machart said. “It is kind of like being on a team again, like how football was for me. You have everyone on the crew with a common goal, and everyone is working toward that goal.”

Machart knew about TSTC from friends who graduated from the Electrical Power and Controls program.

“The financial part of me wishes I would have started out sooner at TSTC, maybe right out of high school,” Machart said. “But at the same time, I would not be the person I am today if I had not gone to Abilene and then come to TSTC. I grew as a person.”