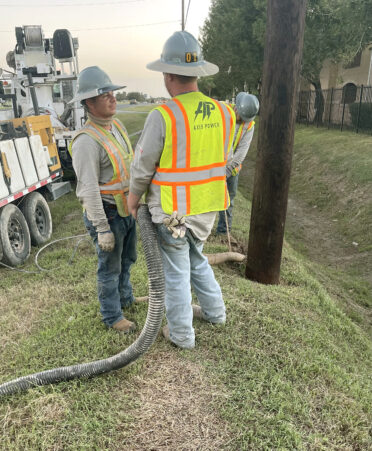 (HARLINGEN, Texas) – Matias Jimenez, of San Benito, grew up working alongside his father, a master electrician. He also served as a sergeant and engineer in the U.S. Army for four years and is currently in the Army Reserve.

With that electrical knowledge, Jimenez decided to pursue the Electrical Lineworker Technology program at Texas State Technical College’s Harlingen campus. He graduated with a certificate of completion last August.

Jimenez began his lineworker career as an operator with Axis Power in Helotes, where he worked for three months.

He said his duties there entailed establishing poles between energized power lines while ensuring safety protocols.

“You perform many tasks manually as far as setting up the pole, tamping the dirt around the pole and centering the pole straight,” he said.

Jimenez said he enjoyed the responsibility he was given at Axis Power.

“I am thankful for TSTC’s lineworker program because it provided a step up with that job opportunity in Helotes,” he said. “That knowledge greatly benefited me. For example, when my supervisor asked me to perform a particular task, I immediately knew what to do.”

Brandon Barnum, a journeyman/foreman for Axis Power, said he was pleased with Jimenez’s skills as a quick learner.

“What we strive for is to have our new employees gain experience in a contracting world,” he said. “Your skill level will be much more valuable when you work at an energy cooperative.”

Recently Jimenez began new employment as an electrical lineworker with Magic Valley Electric Cooperative in Mercedes. He hopes to excel in the job.

His motivation to excel in his career is a result of treating his profession as a brotherhood.

“The feeling of knowing I am leaving my footprint in this world and helping my community, it makes me proud,” he said. “This is something I can tell my children about when I am older.”

According to the U.S. Bureau of Labor Statistics, electrical power line installers and repairers can earn an average annual salary of $55,880 in Texas. Onetonline.org projects that there will be an increase of 16% in the number of such jobs in the state by 2028.

The program is part of TSTC’s Money-Back Guarantee, which refunds a graduate’s tuition if he or she has not found a job in their field within six months of graduation.