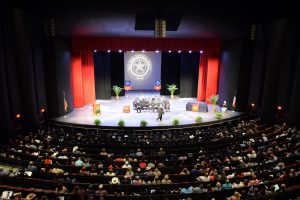 For Mary Madden, an instructor in Electromechanical Technology at TSTC in Sweetwater, this was what she looks forward to each semester.

“It’s a time for the students to celebrate their accomplishments and the families to see what they have worked so hard for,” Madden said. “They’re starting a new life, a new career, and it’s exciting.”

One of Madden’s students who also was a teaching assistant, Gary Miller from Sweetwater, walked the stage on Friday.

“I’m proud of him because he not only succeeded in the program, but he helped motivate others to succeed as well,” Madden said.

Miller, an Army veteran, graduated with an Associate of Applied Science degree in Electromechanical Technology. He graduated with highest honors, was awarded the Outstanding Student Award, and has already accepted a job with M&S Engineering.

“I worked in construction before coming to TSTC, and this was a way to move up in life,” he said. “It’s never too late to come back. Just don’t give up, and keep pushing through.”

Several other students could be found thanking their instructors and excitedly talking about having accepted job offers.

Shawn Baldauf, from Abilene, graduated with an Associate of Applied Science degree in Computer Networking and Systems Administration and has already started working for Batts Communications Inc. After serving in the military, Baldauf decided to come to TSTC for the flexibility and hands-on learning.

“I really love computers. I think they are awesome, so I’m very happy to have a career in something I love,” Baldauf said.

Baldauf is a member of Phi Theta Kappa honor society and a recipient of TSTC’s Program Excellence Award.

During the ceremony, Mike Reeser, TSTC’s chancellor and CEO, encouraged the graduates never to stop learning and always to have integrity.

“Technology is constantly changing, so keep learning. But honesty and integrity are two things that have not changed, so remain constant in those,” Reeser said.

Chemical Dependency Counseling graduate Roderick Mayfield, from Breckenridge, felt those two ideals were extremely important to remember in his chosen career path. Mayfield earned an Associate of Applied Science degree in CDC so he can help others overcome substance abuse.

“I want to make a change in someone else’s life that was not made for me. I know addiction firsthand and am in my third year of recovery,” he said. “Instead of saying how you want the world to change, why not take those steps to make a change?”

Many of Friday’s graduates had family members and loved ones in the audience, but one graduate even had his boss present.

Victor Taylor, of Brownwood, earned his Associate of Applied Science degree in Emergency Medical Services with a specialization in Paramedic Services. Taylor is working for Lifeguard Ambulance Service in Brown County, and his boss was there to cheer him on.

“I think TSTC is one of the best schools out there in this field because of the high standard they hold themselves to,” Taylor said. “I’m working already, if that says anything.”

Taylor also was a recipient of a Program Excellence Award.

“She’s my exit buddy, so we’re finishing together,” Griswold said.

The students who graduated Friday join an alumni network of 100,000 strong across Texas.

For more information, go to www.tstc.edu.

January 24, 2022
Influenced by grandfathers, TSTC students focus on future in diesel industry
January 19, 2022
Dirickson always knew that TSTC was in his future
January 14, 2022
TSTC students, staff excited to be back on campus