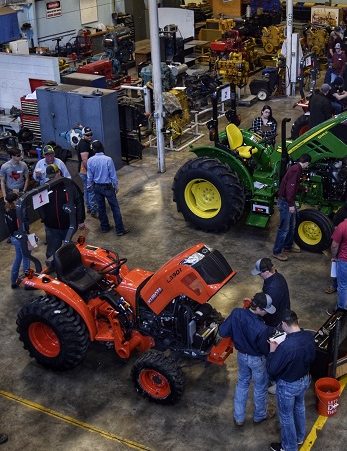 “This was really the first time we have ever come to a tractor technician competition and our coach told us what to do in precheck,” said Austin Ferguson, 17, a junior at Wolfe City High School. “We checked the oil, checked the fluids and tire pressure and started looking for bugs.”

“We did not want to get too cocky,” said Jacob Mims, a junior at Elkhart High School. “It was a learning experience. This is what we want to do the rest of our lives.”

Mims said the team was going to celebrate with Mexican food, and later on, a steak dinner.

The top team from each area will compete in a state FFA tractor technician competition to be held in March at the Houston Livestock Show and Rodeo.

Teams of three students took a written test and did a parts identification test. The students performed a troubleshooting exercise on John Deere and Kubota tractors donated for the competition by United Ag & Turf and Tipton International, both in Waco. Students drove the tractors once the teams found and repaired the problems.

Will Allison, 19, of Teague is a Diesel Equipment Technology major at TSTC. He competed in the tractor competition as a student at Teague High School and served Thursday as a judge.

“It feels kind of cool because I know all the bugs,” Allison said. “It’s fun to watch the students find them.”

Allison said he wanted the high school students to leave with a better understanding of how to use heavy equipment manuals.

For more on the Texas FFA Association, go to texasffa.org.