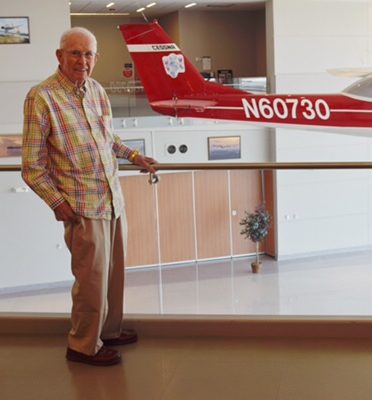 (WACO, Texas) – This was a visit several decades in the making for Dr. Charles P. Fletcher, of Virginia Beach, Virginia.

Fletcher, 95, visited the airport at Texas State Technical College in Waco during the recent Father’s Day weekend while traveling with his family. The land the college is on was once Waco Army Air Field, later known as James Connally Air Force Base, where Fletcher was stationed in the 1940s as a member of the U.S. Army Air Corps.

The visit was the first time that Fletcher had been to Waco since his time in the military.

What people see now at TSTC is a long way from what he and  hundreds of military officers saw when stationed at the base. Buildings for technical programs, student services and campus housing stand where barracks and military buildings once stood.

The airport has a few hangars dating back to the air base days. Fletcher got to see them on a vehicle tour of the airport. He said the smell of aviation fuel came back to him.

Fletcher remembers the heat that he and other military members endured while working on the base.

“The only relief we got was under the wings (of airplanes),” he said. “But it was still hot.”

The base’s former chapel, which at one time housed the TSTC’s Women’s Resource Center, is next to the campus walking track. While a steeple is no longer on top of the building, Fletcher can still see himself going to religious services as a young officer.

“Raised as I was, your spiritual health was as important as your physical health,” he said.

Near the chapel was the base’s movie theater, where Fletcher remembers seeing movies. He also attended dances held on base in which “pretty girls were bused in and checked in and checked out.”

Fletcher tried becoming a pilot early in his military career in 1944, but he was let go because of an influx of pilots. He was put in the airplane mechanics school and trained in Nebraska and Washington state.

He was sent to Europe as World War II was ending and served as a dental assistant in a clinic in Bad Kissingen, Germany. From there, he applied to attend Biarritz American University in France, and after earning a freshman-year equivalency, he returned to Wiesbaden, Germany, and served in the physical training of troops still in Europe.

After the war ended, he returned to the United States and took more college classes at what is now Old Dominion University. Fletcher saw a poster about becoming a pilot. With encouragement from his girlfriend, who later became his wife, he took the necessary tests for a second time and several days later found himself stationed in Waco.

After leaving the military, Fletcher graduated with honors from the Medical College of Virginia and began a 50-year dental practice. He also served in leadership positions in his church, at area banks, on the local school board and at the Eastern Virginia Medical School.

The visit to Waco was conceived by Fletcher’s daughter, Terry Fletcher Cherry, of Virginia Beach, Virginia. She said the idea came to her during a recent visit to downtown Waco with her daughter, Elizabeth Cherry, of Dallas. They read up on Waco’s history and planned out the visit for Fletcher to remember his time in the military.

Fletcher Cherry reached out to aviation staff at TSTC by email, inquiring about what buildings were left from the wartime era.

“I am just so glad he had the chance through the generosity of the college to get to walk down memory lane,” she said.

Accompanying Fletcher, his daughter and granddaughter to campus was his grandson, Nathan Cherry, of Houston, and his two great-grandchildren.

“It was such an honor to show Dr. Fletcher and his family the airfield today,” he said. “There are probably not that many airmen from that era with us today, so I was delighted to get to spend a couple of hours helping him reminisce.”

The base opened as Waco Army Air Field in 1942, according to the Texas State Historical Association, and became headquarters of the Army Air Force Central Instructors’ School in February 1945. The field became a basic pilot-training school in 1948, with the name changing a year later to James Connally Air Force Base. The base was decommissioned in 1962, and by 1965 the James Connally Technical Institute (now TSTC) took over the facility.