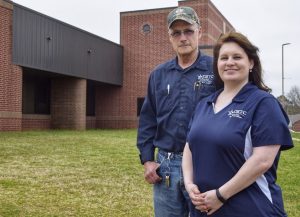 (MARSHALL, Texas) – Two employees at Texas State Technical College in Marshall have been honored for their work and skills.

“We’re incredibly proud of both Amy and Neal,” said TSTC Provost Barton Day. “Both of these great teammates model TSTC’s core values daily and are a joy to serve with.”

Andrews joined TSTC in 2018 and said he was surprised by the recognition. He said a key to being a good co-worker is to be agreeable.

“I had to have someone explain it to me,” he said of the award. “I am the only electrician on campus.”

He said TSTC is the first place where he has not had to wear a hard hat or do shift work.

Andrews grew up in Kilgore and said he considered becoming an industrial arts teacher. But, while in college, he applied for an internship with the International Brotherhood of Electrical Workers and stayed in the profession.

Andrews is also a member of the Union Hill Independent School District Board of Trustees in Gilmer.

Hertel said her email notification about the award was an unexpected surprise.

“I think I stared at the email a good 10 minutes before processing it,” she said.

She began teaching Cyber Security classes at TSTC in 2014.

“I know exactly why I’m here,” Hertel said. “I like to get a student in the program and see them grow. I’ve seen them get confidence and get out of their shell. I work with them on their resumes and prepare them for interviews.”

Hertel grew up in Winnsboro and said she wanted to teach since her childhood days of lining up to give lessons to her stuffed animals. She received her first computer when she was 4. While growing up, she learned about computer parts and software upgrades from a relative who worked at Texas Instruments.

Hertel studied computer science at Northeast Texas Community College and computer information systems at The University of Texas at Tyler. She has CompTIA certifications in A+, Network+ and Security+ and an AccessData certification in Computer Forensics.

Andrews and Hertel will join 33 other TSTC employees statewide who will be honored at the National Institute for Staff and Organizational Development’s Excellence Awards Dinner and Celebration in May in Austin.