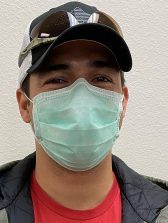 (BRECKENRIDGE, Texas) – Jesse Mendez is not taking any time off.

After graduating from Texas State Technical College’s Vocational Nursing program this fall, Mendez will begin studying for his Associate of Applied Science degree in Nursing (ADN) at the Sweetwater campus next semester.

“My goal is to work in a metro area,” he said of the reason to obtain his nursing degree.

Mendez has always wanted to help others and has a passion for studying human physiology. His sister inspired him to go into the nursing profession.

“The beauty is I have always liked to help people,” he said. “I have always tried to be a Christian, and the best thing about being a Christian is you want to serve others.”

“His dedication and focus has set a perfect example for classmates and future students to follow,” she said. “I look forward to seeing his accomplishments in the nursing field as he moves forward to the ADN program and beyond. He sets his standards high and will be a great addition to the nursing field.”

In nursing, Mendez said his Christian attitude will pay off on a daily basis.

“I know I will have to put others above myself. That is what we have to do to help others,” he said. “I know I have a long way to go because I have only scratched the surface of helping others.”

It took Mendez some time to get started on his nursing path, but he is not looking back.

“I had a few hiccups in my life. I did not like the job I was at and decided to pursue nursing,” he said. “I knew I needed to have a job that was meaningful to me.”

He was led to TSTC because he lived near the Abilene campus and saw it on a daily basis. He also knew the nursing program was only an hour away in Breckenridge.

“One of the guys who took classes at TSTC told me about the program. He said I should give it a shot,” Mendez said. “I took his advice and have not regretted that decision.”

He has been able to experience different areas of hospitals for clinical sessions.

“Working clinicals in the ICU was my favorite part,” he said. “To see doctors and nurses working to save people was inspirational.”

Mendez said he has also seen a change in himself over the past year.

“One of the highlights for me is to see where I was as a person in January to now,” he said. “I have seen how much I have grown not only as a student, but as a person.”