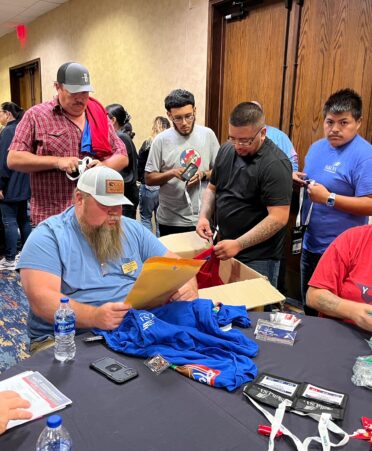 TSTC students and faculty arrive in Georgia for SkillsUSA NLSC 2022

Students from the Breckenridge, Brownwood, Harlingen, Marshall, North Texas and Waco campuses will compete against the nation’s best in events such as Aviation Maintenance, Carpentry and Welding Sculpture.

TSTC students and faculty members joined other representatives of two-year colleges in Texas for a statewide meeting on Monday night at the Sheraton Atlanta Hotel. There the group received cowboy hats, state pins to trade and SkillsUSA shirts.

For some students, there was added excitement on Monday because it marked the first time they had flown in an airplane.

Isela Munoz, of San Benito, Texas, is a Vocational Nursing student at TSTC in Harlingen. She said flying for her was like being on a roller coaster at times.

“I was a little nervous with a bit of turbulence,” Munoz said.

She will compete in the Medical Math contest.

“We have a class called Medication Administration that was the base,” Munoz said. “We learned conversions, IV drip rates, and pediatric math as well.”

Angel Perez, of Los Fresnos, Texas, is an HVAC Technology student at TSTC in Harlingen. He had a window seat for his day of flying to Atlanta.

Perez will compete in the Refrigeration and Commercial Appliance Technology contest. He prepared by practicing brazing and reassembling home and residential appliances that he had taken apart.

Perez said he looks forward to meeting students from other parts of the country and to networking with employers.

Luis Luna, of Stephenville, Texas, graduated earlier this year from the Auto Collision and Management Technology program at TSTC in Waco. He said flying was scary because he does not like heights.

Luna will compete in the Collision Repair contest. He said working in collision repair and refinishing at a shop in Stephenville has helped him prepare.

“I am going to try to get first place and try my best,” he said.

Contest orientations and competitions start June 21 at the Georgia World Congress Center in Atlanta. The day will end with the opening ceremony being held at State Farm Arena, home to the NBA’s Atlanta Hawks. The keynote speaker will be Nick Pinchuk, chief executive officer and chairman of Snap-on Inc.

The conference will end with the award ceremony at 5 p.m. on Friday, June 24, at State Farm Arena.

SkillsUSA is a professional organization teaching employability, leadership and technical skills that can help middle school, high school and college students pursue successful careers and be part of a skilled workforce. SkillsUSA has more than 100 competitive events, ranging from 3D Visualization and Animation to Welding Sculpture.