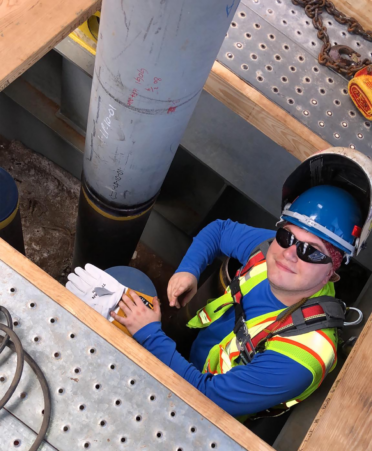 “Pretty doesn’t pass,” for instance, encourages students to get over the notion that their welds have to look like popular videos on Instagram. Clean welds are the ones that pass inspection and get the job done without failure.

“There’s two things you can’t ever weld: mad and in a hurry,” is another example — students should walk away if they find themselves getting frustrated, and take their time on their projects.

“You’re going to be problem-solvers before you become welders,” Tong also advises, saying students should ask questions but also think for themselves as they work.

It is all advice he has gathered as a TSTC welding alumnus — he graduated in 2014 — and the years of industry and teaching experience he brings to his current position at TSTC.

“You got to be able to walk the walk if you’re going to talk the talk,” he said.

Students both in and out of his classes come to Tong for his wisdom about what to do on upcoming welding tests for possible jobs, tips on welding techniques, and even whether he thinks a degree is worth it.

“I’ve gotten hired at jobs at a higher pay, at a higher position, because I have the degree,” he said. “Doing the degree, you learn a lot more. To me, you’re learning the rules of the game. Just being, in general, more knowledgeable makes you have a better understanding of what’s happening, why it’s happening and how to prevent it — which makes you a better welder.”

Tong takes advantage of the size of the welding lab on campus to challenge his students in ways they would not experience at other welding schools.

“I like to throw curve balls at students all the time,” he said, describing how welders in the field frequently weld on jack stands and other welding scenarios. “I’ll tell everyone, ‘Let’s get out here and weld pipe. You have to crawl underneath it to get to the other side.’”

When students are up to the challenge, it can be fun — and rewarding.

“I get paid to play with fire and crawl around on an adult-sized jungle gym,” Tong said. “But it has to be right. You have to be there. You have to have pride in your work.”

“Everyone wants to be a welder because you’ve heard they’ve made good money — if they’re good,” he said. “If you’re a mediocre welder, you’re probably going to get a mediocre job.”

Texas employs the most welders out of any other state in the nation — and the Houston-The Woodlands-Sugar Land metropolitan area is first among other areas for most welders employed, according to the U.S. Bureau of Labor Statistics. The bureau adds that Texas welders can earn an average salary of $45,250 per year. Onetonline.org projects a 13% growth in welding positions in the state through 2028.

The demand for welders is so high that TSTC’s Welding Program is part of the college’s Money-Back Guarantee. If graduates do not find a job in six months after earning their degree, TSTC will refund their tuition money.