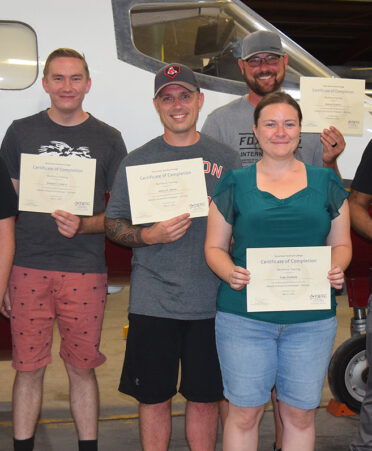 The 16-week Airframe and Powerplant training program prepares veterans, as well as civilians and active-service personnel, to become well-rounded technicians. It is intended for anyone eligible to have their airman certificate or rating signed by the Federal Aviation Administration on the basis of prior civilian or military aviation maintenance experience.

Instructor Willie Rodriguez, who is a U.S. Air Force veteran, said he enjoys helping others prepare for the civilian workforce.

“We at TSTC are bridging the gap from their past in the military to the present in civilian life,” he said. “I can relate to what many of these men and women will be going through because I did the transition when I retired.”

Rodriguez said he wants his students to know that the program is designed for them.

“I get calls from former students telling me they appreciate what we at TSTC have done for them,” he said. “I want our veterans to know that TSTC is still there for them and will not give up on them after they finish this program.”

When students complete the program and pass the FAA license test, Hernandez said many options for them exist.

“Having this license will open the door anywhere in the world,” he said. “There are so many different possibilities for them.”

Recent program graduate Matthew Knowtny, who will retire later this year from the Air Force, said having Rodriguez lead the program opened his eyes to new fields.

“I have been working on the airframe for years. With Willie, he teaches you things in a way that you can learn differently,” he said. “It is a quick response because we have to learn it, retain it, tear it apart and build it.”

Knowtny said the appreciation that Rodriguez has for his students is different than he has experienced with other instructors.

“He sees the capability of each person in class and uses it to make us better,” he said. “He instantly bonds with the students because he knows what we are going through.”

Knowtny said he talks to his fellow service members about the program, hoping they will enroll.

“I want my fellow airmen to be able to tap into the civilian side of life. This is one of the best ways to do it,” he said.

Darron Williams, who has served in the Air Force for 19 years, completed the program this month.

“This gives us the best chance to prepare for a civilian career,” he said. “More people need to take advantage of this program. I am talking to many people who plan to take the class.”

Cindy Brunett, executive director of Workforce Training at TSTC, said more than 25 people have signed up for the next program.

“That is our largest enrollment since 2019,” she said.

Classes meet four days a week during the evening hours. Over the course of the 16-week program, students are provided with technical instruction and hands-on training on aircraft systems and engine equipment.

The need for aircraft mechanics and service technicians in Texas is forecast to grow 8% by 2028, according to onetonline.org. The average salary for a technician in the state is $66,710, the website showed.

In addition to the FAST Trac program, TSTC offers Associate of Applied Science degrees and certificates of completion in both Aircraft Airframe Technology and Aircraft Powerplant Technology at its Abilene, Harlingen and Waco campuses.