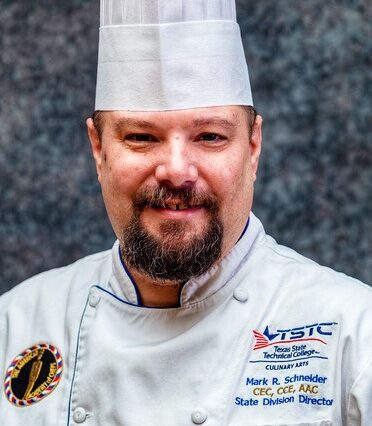 Schneider joins about 350 members of the international honor society. And, he joins Executive Pastry Chef Michele Brown as the only TSTC Culinary Arts instructors to have achieved the honor.

“It’s a privilege to bring this back to TSTC,” Schneider said. “For TSTC to have one (instructor) is amazing, but to have two (instructors) is unheard of. To be in the Epicurean World Master Chefs Society – it’s something you don’t ask about. It’s invitation-only.”

Schneider was honored at the organization’s Annual Sponsors Luncheon in late February at Via Real in Irving, where he created a Texas-themed dessert: Tequila Lime White Chocolate Bavarian Dome with Prickly Pear Gelee and Avocado Ice Cream with Praline Sauce.

“The event was a huge success, with Chef Schneider’s dessert being the star of the lunch,” Brown said.

Schneider invited Len Pawelek, a TSTC Culinary Arts instructor, to cook with him at the luncheon where Pawelek made appetizers.

“We are blessed at TSTC to have chefs that have excelled in their careers,” Pawelek said. “Some of the most respected chefs are recognizing them.”

Schneider said he will be trained and coached by other society members to prepare for competitions like the IKA/Culinary Olympics and the Expogast Villeroy and Boch Culinary World Cup.

“To me, I have learned with different honors that this is just another plateau,” he said. “It puts me back into service and paying it forward.”

Schneider is a 1989 graduate of Midway High School. He received a culinary diploma from the Greater Cincinnati Culinary Academy in 1993 and an Associate of Applied Science degree in Food Service and Culinary Arts from TSTC in 2001. He also earned a Bachelor of Applied Arts and Sciences degree in Business from Tarleton State University in 2009.

Schneider became a certified executive chef in 2002 and a certified culinary educator in 2008 granted by the American Culinary Foundation.