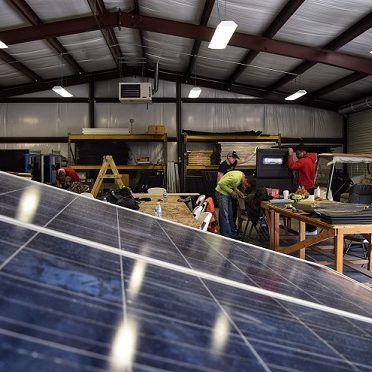 (WACO, Texas) – Julian Rodriguez’s future in the solar industry looks to be as bright as the sun shining on the panels generating energy in Texas.

Rodriguez, 18, of McCamey in Upton County, is in his second semester at Texas State Technical College, studying for an Associate of Applied Science degree in Solar Energy Technology and certificates in Energy Efficiency Specialist and Electrical Construction. The combination is referred to at TSTC as the Triple Crown.

Rodriguez chose to study the alternative energy because of what is going on in and around his hometown. Upton County is home to the Alamo 6 and Pearl solar farms, both built by OCI Solar Power, and Solar 2, which is owned by Vistra Energy. In neighboring Pecos County, California-based 174 Power Global broke ground in January 2018 on the 1,500-acre Midway Solar project. The projects are bringing extra workers to Upton County, which has more than 3,600 residents.

“It’s a lot of unfamiliar faces, which is cool,” Rodriguez said. “It’s interesting to see. It’s opened up a lot of possibilities for me.”

The solar industry includes more than 13,000 employees in the state, according to the Texas Solar Power Association.

“I would hope job seekers would view us as a growing industry making a positive impact in Texas,” said Charlie Hemmeline, executive director of the Texas Solar Power Association in Austin. “I’ve certainly heard that message from job seekers, including from mid-career professionals looking to transition to solar and leverage their existing energy industry expertise.”

Texas is ranked sixth in the country in solar energy consumption, according to the Solar Energy Industries Association’s December 2018 Solar Spotlight – Texas. About 282,000 Texas homes are powered by solar, according to the SEIA.

There are more than 650 solar companies in the state, a majority of them specializing in installation and manufacturing, according to the SEIA.

Ignacio Guajardo, co-owner of Peg Energy in Corpus Christi, Laredo and San Antonio, said the company recruits employees for their skills and then trains them.

“There are electricians and structural engineers and a lot of different people that know of certain areas of solar, but not totally solar,” he said. “It’s definitely a challenge when you are looking for installers or technicians or designers. It’s not all that easy.”

Guajardo said some customers had to know others who have solar to understand how panels are installed and function. He predicted the company could generate growth in the next few years, expanding beyond South Texas.

The U.S. Bureau of Labor Statistics has projected the number of solar photovoltaic installers will rise to more than 23,100 jobs nationwide by 2026.

Elliott Graham, 20, of Mansfield is a second-semester TSTC Triple Crown student. He said his parents encouraged him to pursue the associate degree and certificates.

“I enjoy just being outside,” Graham said. “I’d rather be outside than at a desk job. It’s something different every day.”

He said he has prepared for classwork by going to a gym to improve his fitness and learning the mathematics behind solar energy. Graham said it is important to calculate precise roof dimensions before determining how many panels will be needed.

“You want to save as much time as possible for the customer,” he said.

TSTC’s Solar Energy Technology program has at least 35 students this semester, with many studying for the associate degree and two certificates. Graduates tend to work in parts of Texas with locally offered solar incentives and rebates.

“It gets them into good-paying jobs quicker,” said Hugh Whitted, a TSTC Solar Energy Technology instructor. “It makes them more marketable.”