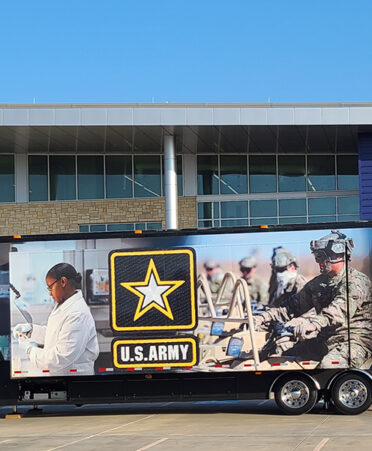 (ROSENBERG, Texas) – Transitioning from the military and heading toward the next stage of life involves much more than hanging up a uniform and donning civvies.

“That by itself is a period of life when most individuals are transitioning from who they are to who they are going to be,” he said.

“You have to go through the process of reinventing or recreating yourself all over again,” said Buford, who is himself a veteran.

Buford’s department at TSTC is ready to assist prospective students who are veterans, active-duty service members and National Guard members in transitioning from the military to civilian life. The department also serves their dependents.

“When I first left the military, I had no idea how to transition my military skills to a civilian sector,” Buford said. “It took me a while to figure out that I can manage people, I can manage projects, I can plan — I have all these skills, now where do they fit in in the civilian world or how do I apply that to what my next life is going to look like?”

An initial conversation with a prospective veteran student generally covers what benefits TSTC accepts — the college accepts benefits from the GI Bill and the Texas Hazlewood Act, among others — how to use those benefits, and what program might be a good fit for the student’s skills based on what their job was in the military.

“We present them with opportunities to experience college life — some of them for the first time, to strategize what they want their future to look like and how they’re going to get there,” he said. “A lot of us transitioning out of the military have no idea what we want to do outside of the military. Some never expected to leave the military to begin with.”

“It is (challenging) to get all your paperwork to get everything going,” she said. “You get tossed around from one department to another. You get put on hold 50 million times, and it’s very frustrating.”

Crites’ goal? To make other veterans’ experiences different from hers.

“TSTC doesn’t do that,” she said, describing how she ensures that prospective students know who is going to be in contact with them and when. “We feel like a small college that’s going to take care of you. We want to be a one-stop shop for our veterans.”

That includes seeing those students to and through college.

“We take a holistic approach to serving our military members,” Buford said. “We don’t just want to provide them with an education. We want to make sure they’re employed after education and are able to adequality make that transition from military to civilian life.”

One example of that approach is TSTC’s Career Services department, which helps all students develop resumes, interview skills and more. This is particularly useful for students with a military background who may never have gone through the process before.

“I didn’t know how to dress appropriately for an interview,” Buford recalled. “Most military members have never conducted an interview.”

Other resources that TSTC provides, including assistance with child care, food and transportation, stem from the Advocacy and Resource Center.

Sometimes, because of the culture of their service, veterans may hesitate to ask for help.

“Some of our students come out of the military and they don’t have a home or resources,” Crites said. “They served our country, and personally I think they need those things. The biggest challenge is if they don’t tell us and they try to rough it on their own.”

What students share is confidential. Crites’ focus is on connecting them with the resources they need while removing any barriers to the next stage of their success.

“With the amount of innovation, the equipment and technology we have — and the care the instructors exhibit, it really blows them away, but it also gives them hope for what is to come,” Buford said. “They realize they can take the skills they currently have, they can enter this course, and now they have a plan to move forward.”

For more information about resources for veterans at TSTC, visit tstc.edu/admissions/veterans.