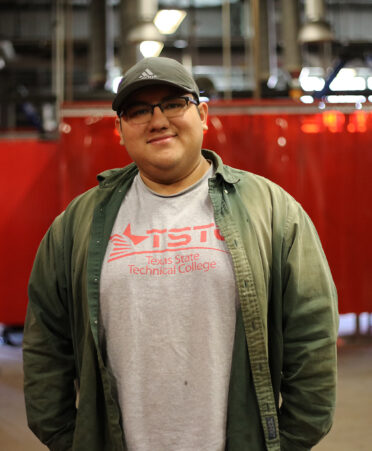 (ROSENBERG, Texas) – Omar De La Cruz Jr. is a third-generation welder — two of his uncles and his grandfather were in the industry.

“I still remember the time when my grandpa was welding right in front of me,” De La Cruz said. “I enjoyed watching him lay down a bead.”

The East Bernard resident decided to attend TSTC’s campus in Fort Bend County because of its proximity to his home, spacious welding lab and instructors.

“In the beginning I was a little nervous because it was something new — I’d never been to college,” De La Cruz said. “I’d just graduated from high school, so I didn’t really know what to expect. The instructors were kind. They were caring. The staff members as well.”

De La Cruz was particularly appreciative of his first-year seminar class for assisting his transition to college.

“It just really helped me,” he said. “I wasn’t by myself. They didn’t just drop me in a class and say ‘good luck.’”

While honing his welding skills during classes and hands-on lab experience, De La Cruz also enjoyed gleaning wisdom from TSTC’s Welding Technology instructors’ wide range of industry backgrounds. That included “the things they used to do, the things they’ve done, the places they’ve been, and what the workforce is expecting from us,” he said.

“One of my instructors told me that in the beginning, you’re going to be pursuing the money as much as you can, but then after a while it’s not just about the money; it’s about the craft,” De La Cruz added. “Then you start to appreciate more about welding if you’re pursuing the skill.”

De La Cruz earned his Associate of Applied Science degree in Welding Technology, as well as a certificate of completion in Structural and Pipe Welding. He recommends that prospective students pursue a similar path.

“Do your associate (degree) because you have a better chance at getting hired and being paid more,” he said. “Pursue the certificate too. They’re giving you more practice on what you need to focus on. By the end of the semester, you should feel more confident.”

De La Cruz’s parents have been his biggest motivators for working hard — especially after witnessing their work ethic throughout his childhood.

“I want them to enjoy life instead of working,” he said. “I saw that it’s time for me to help them out. There have been days when I want to go home, quit my jobs, sleep as much as I can. But that’s what’s pushing me forward: I want my parents to be relaxed.”

TSTC offers training in Welding Technology at all 10 of its campuses across the state. The program is part of the college’s Money-Back Guarantee. If participating graduates are not hired in their field within six months of earning their degree, TSTC will refund their tuition.

In Texas, welders can earn an average annual salary of $47,820, according to onetonline.org, which projects the positions to grow across the state by 13% through 2028.