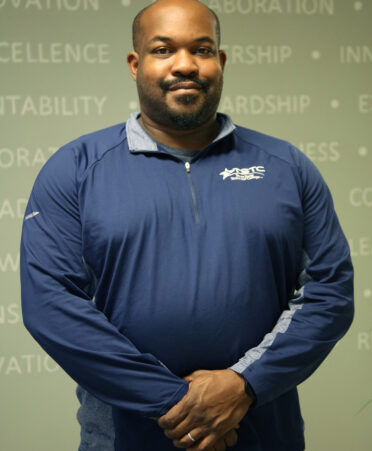 (HARLINGEN, Texas) – As an academic advisor for the Upward Bound program at Texas State Technical College’s Harlingen campus, Anthony Johnson II is part of a long tradition of African Americans whose positive impact will be felt for generations to come and who are celebrated during Black History Month.

Johnson said he is honored by the recognition.

“I am honored because this is a reflection of my heritage,” he said. “Harriet Tubman and Rosa Parks inspired me because their stance as women during that period made an incredible impact.”

Johnson’s contributions include assisting area high school students, some of whom come from low-income backgrounds, in attaining a college degree.

“I am here to offer a service that I did not have when I was young,” he said. “These individuals will be the first in their family to attend college.”

Johnson outlined some of the steps he takes to help them get into college.

“I do everything I can to ensure these students attend the college of their choice,” he said. “I help them maintain their grade-point average. In addition, I help them keep track of all the necessary testing they must complete. Next, I guide them through college applications, as well as scholarships. Most importantly, they are informed of the college’s qualifications. If they abide by those guidelines, it can lead to acceptance.”

Johnson was motivated to be a leader in this role through his own perspective.

“I remember how it was when I was young,” he said. “I only met with my counselor on limited occasions. In this role, I serve as a buffer between the counselor, teacher and sometimes the parents. Students are often afraid to talk directly to them. Overall, I truly enjoy assisting them. They have a goal to attend the college of their choice. I want to see that happen.”

His advice for high school students is to work hard to achieve their goals.

“I tell students it is important to reach that next level and earn your degree,” he said. “We have a former program student who attended San Benito High School. She is now one of our academic advisors.”

Johnson has developed countless relationships with students in his role as advisor. He recalled their appreciation for his help.

“When students meet me, they often are intimidated by me at first,” he said. “I strongly believe there is no reason to be aggressive. A student once told me I was the complete opposite of what he initially thought. I found it humorous.”

According to the U.S. Department of Education, the goal of the Upward Bound program is to increase the rate at which participants complete secondary education, and enroll in and graduate from institutions of postsecondary education. For more information about the program, visit www2.ed.gov/programs/trioupbound.

The celebration of African American history was a vision set by Carter G. Woodson (1875-1950), who is regarded as “the father of Black history.”

Woodson’s determination to raise awareness of African American accomplishments eventually led to the creation of Black History Month, which is observed during the month of February in the United States.