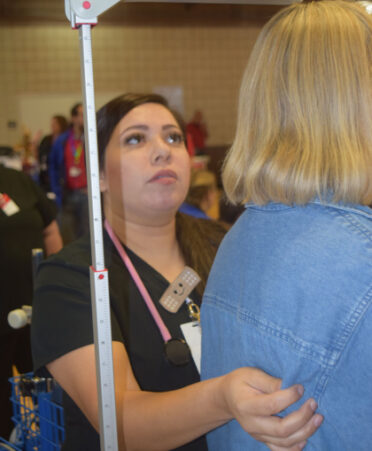 (SWEETWATER, Texas) – When life presented a challenge, Melina Delao did not let it deter her. It did take time for her to steer her life back into a career that she always wanted, however.

Delao, who once worked for the Sweetwater Reporter newspaper and later with the Sweetwater Independent School District, always wanted to be part of the health care field. Her dream of becoming a nurse is closer to reality now that she is a candidate for graduation with a certificate of completion in Vocational Nursing at Texas State Technical College.

“My life took a turn and went in a totally different direction,” she said. “Twelve years and four kids later, I am going to graduate as a nurse.”

Delao began studying for a nursing degree after graduating from Sweetwater High School in 2010. But life challenges arose, and she had to put her dream aside.

“It has been an amazing experience,” she said of her time studying at TSTC. “I have met so many new friends and have been able to form great relationships with my instructors.”

There is another aspect of her time at TSTC that Delao has also enjoyed.

“I have been able to live the college life I was never able to experience before,” she said.

But it has not been a simple journey for her in college.

“To balance everything out, from college and work to my family, has been difficult,” she said. “I have been able to pull through because God wants what is best for me and my family.”

Delao said students interested in the Vocational Nursing program should be prepared for demanding work on a daily basis.

“The hardest part for me has been exam days because we come in to take three exams in one day,” she said. “But I know by studying hard, I will be able to get through it.”

While exam days can be stressful, Delao said helping others has been the best part of the program. That includes helping local residents during the Nolan County Health Fair held earlier this year on the TSTC campus.

“I love it when the community comes together. This gave everyone a chance to see health options,” she said. “A simple vital sign can tell you if something is not right. That is what we were able to tell people.”

Delao also enjoys attending clinicals at local hospitals. She said each session has been different, but she knows they will help during her career.

“To be able to see what happens with real people makes the job realistic for me,” she said.

Delao, who is president of her Vocational Nursing class, said she has been talking to different employers and hopes to remain in the Sweetwater area. Instructor Elizabeth Lynn sees her having a long career in the health care field.

“Melina strives to do her best in everything she is tasked with,” Lynn said. “She has strong leadership abilities and will be a great nurse.”

The final aspect of college life for Delao will be realized on Thursday, Dec. 15, when she participates in TSTC’s commencement ceremony at the Abilene Convention Center.

“I have reached out to all of my family to take the day off. I want everyone to see me walk that college stage and celebrate with me,” she said.

TSTC’s Vocational Nursing certificate program is also available at the Breckenridge and Harlingen campuses. Upon completion of the program and passing the National Council Licensure Examination, graduates are classified as licensed vocational nurses (LVNs).

According to onetonline.org, LVN jobs were forecast to increase 17% in Texas between 2020 and 2030. The median annual salary for LVNs in Texas is $48,520, the website showed.