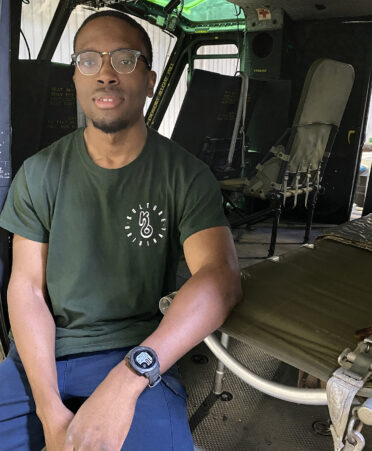 (ABILENE, Texas) – Myles Christie was taking pictures at an Abilene event when he learned what was inside a hangar at the Abilene Regional Airport.

After his discovery, Christie, who was born in Jamaica and has lived in Abilene for the past nine years, thought that an aviation career could be in his future. He is now studying for Associate of Applied Science degrees in both Aircraft Airframe Technology and Aircraft Powerplant Technology at Texas State Technical College.

“I met some guys at a local event, and they told me about the program,” he said. “I always knew there was a hangar here but never knew what was inside.”

Christie said at the time he was studying nursing, but considered changing his career path.

“I applied for the (aircraft) program. When I was accepted, I was excited,” he said. “I have been happy with the things I have been able to learn so far.”

Christie said he first thought about a career working on cars.

“But there is more money to make in the aviation field,” he said.

The need for aircraft mechanics in Texas is forecast to grow 8% by 2028, according to onetonline.org. The average salary for a technician in the state is $66,260, the website showed.

Now in his second semester, Christie said some areas were harder than others.

“I had some difficulty learning basic electricity, especially understanding DC circuits,” he said. “But everyone in the program is willing to work with people. We want to help each other out, and that got me through that part.”

Christie noticed an immediate trend with his classmates.

“It really is teamwork that makes the dream work group,” he said. “I like how everyone works as a team.”

That teamwork includes one of his instructors, Dave Doughty.

“They are very helpful,” Christie said. “That is what motivates me to get up in the morning. I like how we have a team. This is the first early-morning class I have ever looked forward to attending.”

Doughty said students work hard during class to prepare them for the next level.

“Everyone works together because they want to succeed,” he said. “Myles is doing a great job working with his classmates to make sure he knows the correct way to complete the job.”

Christie said he hopes one day to work on helicopters, and he often glances at the Bell UH-1 Iroquois “Huey” that is in the hangar.

“I really want to work on helicopters, and I know this program is centered on airplanes,” he said. “I would really like to get my hands on the Huey, but we know that is not what we are training to work on.”

Christie said attending TSTC will open many doors for him.

“I want to know more about the engines because I like to get my hands dirty,” he said. “I think a career in general aviation working on planes will be a great thing.”