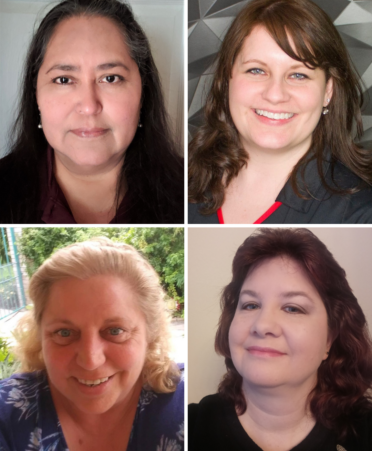 (ROSENBERG, Texas) – Texas State Technical College’s Cybersecurity program is training students to seize opportunities in the growing field. Even with historic female contributions in information technology, there is still room for more women in the male-dominated field.

Cybersecurity instructors Norma Colunga-Hernandez, Amy Hertel, Jan Nesmith and Carol Scheler, who share decades of teaching experience at TSTC, spoke about their backgrounds in the industry and their advice for the next generation of female cybersecurity specialists.

How did you first get interested in this industry?

Nesmith: I have been in the field since 1986. I started in mainframes, and I’ve been through all of the transitions and technologies throughout the decades.

Hertel: I had an uncle who worked at Texas Instruments. When I was 4, back when computers weren’t in everyone’s homes, he built me one out of scraps of things that they were going to throw away. I absolutely became enamored.

Scheler: I started with computers in high school. My very first computer I ever worked on was an Apple IIGS with dual floppies. We were rocking and rolling back then.

Colunga-Hernandez: I fell into it. My degree is in engineering, and in the engineering program, I had to work with computers. When I got my first job, it was with the Army. We tested communication systems.

What is it like being a woman in this field?

Hertel: For me personally, it’s been a struggle getting through college and being the only female in the classroom. I had to deal with a lot. I think it made me stronger, and over time, it gave me the desire to keep pushing myself. I know what I want to do, and I know where I want to be.

Scheler: I’m going to piggyback off that. I was also the only female in the classes. I’ll be honest, one of the driving forces that got me into this field was a male said I couldn’t do it. I did it for spite. I’m glad I did because I’ve really enjoyed being in this field. Women tend to be more detail-oriented — if you give us an issue, we’re going to look at the “who, what, where, when, why” instead of glossing over it.

Colunga-Hernandez: I was the same way — I was the only girl in the class. You’ve got to go above and beyond to be able to keep up. There were times when I went home and I was like, “I could do something else. I don’t have to do this.” My mom was always the one who said get back up and go. I’m really grateful for her pushing me. I’ve got four sisters, all telling me I could do it and pushing me forward. That was my motivator: to not let them down.

Nesmith: I too was motivated a lot like Carol because men told me I couldn’t do it. It drove me to get more degrees. You have to prove what you can do, and then people will come to you.

What advice do you have for women looking to enter the Cybersecurity field?

Scheler: Let women know that they can do it. If it’s something that they’re very interested in, they can do it. As long as you’re willing to learn, you can do anything. Don’t let anyone discourage you.

Nesmith: I share with students that I’m far from perfect. Don’t be afraid of making a mistake. That is the process: making mistakes and learning from them.

Colunga-Hernandez: You don’t know it until you try it. Even if you try, you’re going to pick up something. The money also helps. The earning potential is a big seller.

In Texas, information security engineers can earn an average annual salary of $89,750, according to onetonline.org. The number of these positions is projected to grow by 20% through 2028.

TSTC’s Cybersecurity program is an online learning opportunity. Students can pursue an Associate of Applied Science degree in Cybersecurity, an advanced technical certificate in Digital Forensics Specialist and an occupational skills award in Basic Cybersecurity.