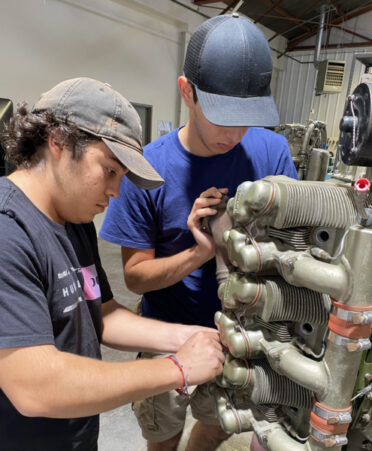 (ABILENE, Texas) – Texas State Technical College aviation maintenance students have an appreciation for the sky and the machines that fly through them.

In honor of National Aviation Appreciation Day on August 19, which also is aviation pioneer Orville Wright’s birthday, students recently reflected on what led them to an aviation career.

For some students, it was a family member who led them down the aviation path; for others, it was a general love of planes.

“I like to call these guys our airplane dorks,” TSTC aviation maintenance instructor Dave Doughty said of his students. “If there is an airplane flying over the hangar, they will run to the door to see what kind it is. If they cannot make it, we hear them debating what kind of plane it is.”

Doughty said the students all have one thing in common.

“They appreciate the higher technology used in maintaining airplanes,” he said. “Each of these students is striving to be the best they can be in this industry.”

Darwin Binck, of Arlington, and Quinton Gonzalez, of Wichita Falls, are two graduating students who have an appreciation for airplanes through family members.

“My uncle and grandfather both flew,” Binck said. “I joined the military and flew drones for years. I decided then that I wanted to work on airplanes.”

Gonzalez said his father, who was in the U.S. Navy, frequently traveled by air. That led to Gonzalez’s love for airplanes.

“I would sit in the airport and watch the planes go by,” he said. “I knew early on that I wanted to be part of that. It was nice to find a school that specializes in this field so close to home.”

Matthew Cameron, of Bastrop, also found his aviation passion through a family member.

“My dad was a flight instructor in the U.S. Army,” he said. “I knew I would be working in the industry. I worked in avionics in the Navy, and having this program available is fantastic.”

Ory Eckhoff, of Hawley, said a field trip to the Johnson Space Center locked in his passion.

“I always remembered that field trip,” he said. “My older brother went to TSTC for aviation, and I decided to follow the same route.”

Ramiro Zamora, of Eastland, knew that aviation was his path early in life.

“I needed a job, so I went to the Eastland airport and would do anything,” he said. “I started out by just mowing the lawn around the airport. I eventually was able to clean some of the planes.”

Zamora said attending air shows as a child was his inspiration.

“I loved watching the planes come in and take off,” he said. “I talked to some of the pilots and instantly fell in love with flying.”

Lorenzo Lozoya, of Hawley, said he always enjoyed watching airplanes as a child.

“When you are a kid, you do not think about what you want to do,” he said. “I came (to TSTC) in high school and knew it would be a good career.”

The need for aircraft mechanics and service technicians in Texas is forecast to grow 8% by 2028, according to onetonline.org. The average salary for a technician in the state is $66,710, the website showed.