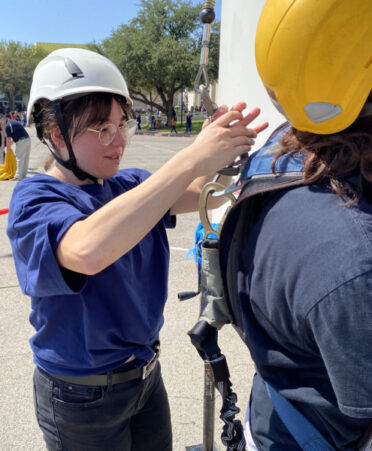 From the family garage to wind farms, Carr’s passion leads her to TSTC

(SWEETWATER, Texas) – Working with her grandfather on engines is something that Emily Carr has never forgotten.

It made sense for her to enter a career where she can work on mechanical equipment. Carr, of Odessa, is studying for an Associate of Applied Science degree in Wind Energy Technology at Texas State Technical College.

“My grandfather was very intelligent when it came to mechanics,” she said. “I would always go out with him and work on the engines. I fell in love with it.”

Carr talked to her grandfather, Charles Carr, about a career in diesel mechanics. He quickly said it would not be a good fit for her. Instead, he asked her to look at a career in wind and aviation.

With no programs available at local community colleges, Carr began exploring options outside of the Permian Basin.

“I wanted to stay close to home. That is how I found out about Sweetwater and TSTC,” she said. “TSTC offered a degree program in wind, and that was my first option. It has been the best decision I have made.”

After she completes her associate degree, Carr said she plans to work for a few years before continuing her education in her aviation passion.

“After a couple of years, I am thinking about going back to school for aviation mechanics,” she said. “I have always found that field interesting.”

Carr is currently concentrating on her studies. She will complete her Wind Energy Technology requirements this semester, then she will focus on general education courses in the spring in order to complete her associate degree requirements. She relies on the bond with her classmates to get her through class.

“We all feel like a family,” she said. “Since I have been here, I have grown both mentally and physically.”

When Carr started the program, she was nervous because of the industry being dominated by men.

“I knew it was a man’s field,” she said. “But I saw that (instructor) Billie (Jones) could do it, that any woman could do it. It gave me a lot more hope that I could succeed.”

Carr has found herself becoming more competitive with her male classmates. That has led the group to become close friends.

“I love to compete against those guys,” she said. “They are like my big brothers and want to take care of me. But I do want to show them I will be able to compete with them.”

“Emily is driven to figure things out on her own,” he said. “She is always listening to the instructors, and that will give her a lot of drive. She is knowledgeable in the mechanical aspect of the program. That is her strength. She is going to be a valuable asset for any company.”

One aspect of the class that Carr has not yet completed is her first climb up the TSTC wind turbine, but she is looking forward to it later this year.

“I love the adrenaline rush of it,” she said. “Heights do not bother me, so it should be easy. We have been preparing for it since we started because safety is our top priority.”

During the recent World of Work Youth Expo in Abilene, Carr saw that adrenaline in high school students who climbed TSTC’s turbine simulator.

“I saw a lot of myself in them,” she said. “They were scared at first, but once they got on the ground, they wanted to do it again. It was fun to see their reactions.”

To help her relax outside of class, Carr often spends her time drawing. She admits that she is a self-taught artist, having started by drawing horses at age five.

“You can learn so much about yourself when you draw,” she said. “I do not like to show people what I draw, but some of the resident assistants were able to see some of the work. They all said it was really good. It is my escape from the world.”

Carr has also been able to provide leadership around campus as a resident assistant. She said many lifelong friendships have been made because of that role.

“I am going to remember these guys for years,” she said. “We have all built a strong bond.”

Being a resident assistant has also given her a chance to learn about the people enrolled in other programs.

“We have so many talented students at TSTC, and that is what makes living on campus great,” she said. “TSTC is also home to some great instructors who are our mentors preparing us for a career.”

The job outlook for the wind energy industry is bright. According to onetonline.org, the need for wind turbine service technicians in Texas was forecast to increase 83% from 2018 to 2028. The average annual salary for a technician in Texas is $51,560, according to the website.