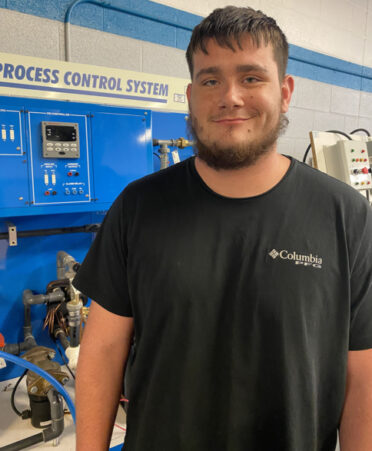 (SWEETWATER, Texas) – Phillip Taylor grew up learning how to wire and fix things around his parents’ house.

It was only natural for him to look for a career with a hands-on approach to repairs. His path to Texas State Technical College’s Electromechanical Technology program started when he suffered an injury that ended his collegiate football career. Now he is working toward an Associate of Applied Science degree and is on schedule to graduate next spring.

“During my freshman year of college football, I got a concussion,” he said. “I had to change directions and thought I could study electromechanics or work on an airplane. My dad said no to airplanes.”

Knowing that Taylor needed to study somewhere, his girlfriend, Tatum McFarland, told him about the various programs available at TSTC. She graduated last summer from TSTC’s Welding Technology program.

“Tatum told me all about the opportunities available at TSTC,” he said. “She said I should look into some of the programs offered, and Electromechanical Technology caught my attention.”

Taylor said the reason he chose that career path was from working with his father on electronic equipment around the house and vehicles in the garage.

“I have always liked working with my hands,” he said. “It has been easy to pick up different things, especially with the instructors walking you through the process. TSTC has the best instructors.”

Taylor appreciates his time in class because it is his time to show what he has learned.

“It’s easy to pay attention to what is going on in class because the instructors want you to succeed,” he said. “You are able to learn from them because they have been out there working.”

Arnoldo Soto, one of Taylor’s instructors, sees a promising career for Taylor when he completes the program.

“He is able to catch on to the projects really quickly,” he said. “Phillip was around wiring and fixing things growing up. It comes natural to him.”

Taylor said the more time he spends in the lab, the more comfortable he becomes in his abilities to accomplish a task.

“I thought a lot of what I would be learning would be hard,” he said. “Once you walk through it, the different areas we cover are some of the easiest things in the world to do. It just takes a lot of practice.”

With graduation on the horizon, Taylor said he looks forward to putting his skills to work.

“There are so many job opportunities in West Texas,” he said.

According to onetonline.org, the need for electromechanical and mechatronics technologists and technicians in Texas was forecast to increase 13% between 2018 and 2028. The website stated that the median salary for these technicians in the state is $61,250.