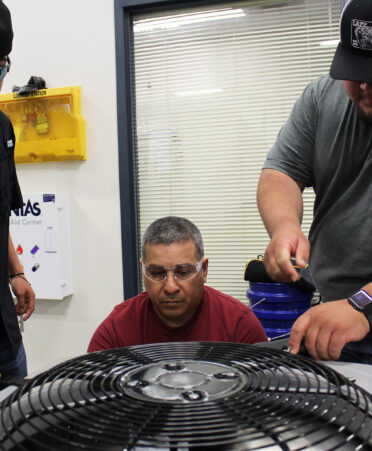 (ROSENBERG, Texas) – Antonio Ramirez wants to work at a bigger company. Jacob Ramirez wants a good job. And one day, Eujenio Rojo wants to own his own business.

All three are hoping to put their dreams to work after earning their Associate of Applied Science degrees in HVAC Technology at Texas State Technical College.

Antonio Ramirez, of Brenham, is already working at an air conditioning company as he pursues his degree. He often presents the scenarios he encounters while in the field to the HVAC faculty members at TSTC.

“I ask my instructors if we’re doing it right,” he said.

Jacob Ramirez, of Eagle Lake, first became interested in the heating, ventilation and air conditioning industry when a family member told him about the opportunities that were available.

“He was just telling me all the things I could do,” Jacob Ramirez said. “I could travel, I could work in Houston, I could work on big buildings, anything. That’s why I chose HVAC.”

Rojo, of Richmond, enjoys working with his hands — and not sitting behind a desk. Prior to transitioning from the U.S. Marines, he became interested in HVAC. Getting hands-on experience in the lab at TSTC has been ideal for Rojo’s preferred method of learning.

“If you do it, you learn more,” he said. “You memorize it by helping someone else out. You’re basically teaching someone — you start to remember things, and your knowledge increases from there.”

“They said, ‘You need to go here — the instructors are cool, they work with you, they’re willing to help you, no matter what,’” he said.

“TSTC actually does a lot for their students,” he said, referencing the college’s Lending Library, where qualifying students can borrow books and tools instead of purchasing them. “The assistance you get for VA (Veterans Affairs) is pretty phenomenal. You don’t have to deal with anything — they’ll send the paperwork.”

Antonio Ramirez has many good memories from his time in the HVAC Technology program, but putting AC units together may be among the best parts of his training.

“Putting the units together, taking them apart, finding the problem – that’s how I really learned,” he said. “And asking the instructor, ‘Why does this do this?’ or ‘What happens if this breaks?’ I liked that.”

Rojo recalled the fun of working with classmates on the units — and the friendships it helped to create.

“We did a lot of work together,” he said. “We worked in a team environment.”

TSTC’s campus in Fort Bend County offers an Associate of Applied Science degree in HVAC Technology and a certificate of completion in HVAC Technician. HVAC Technology is one of TSTC’s performance-based education programs, which enables students to complete their training at a flexible pace.

In Texas, heating, air conditioning and refrigeration mechanics and installers can earn an average annual salary of $48,030, according to onetonline.org. These positions are projected to grow in the state by 16% by 2028.