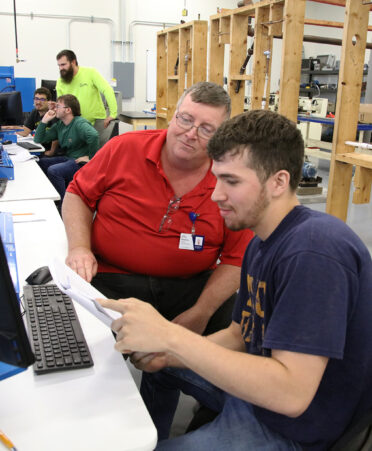 (ROSENBERG, Texas) – When Brian Weakley was driving the 45 miles between Needville and Houston in his former role as a maintenance manager, he would pass the current site of Texas State Technical College’s campus in Fort Bend County every day.

“I watched it being built,” he said.

In 2019, Weakley was hired as a TSTC Industrial Systems instructor. His decades of experience in troubleshooting and maintaining industrial machines, systems and equipment provide TSTC students with a wealth of knowledge beyond a textbook.

But back when Weakley was around some of his students’ age, freshly graduated from high school, he was not quite sure which direction he wanted to take in life. When posed with deciding between military service and continuing his education, Weakley chose school.

His mother clipped an advertisement from the local paper for a brand-new program at Texas A&M University: electronic technology. After earning the two-year degree, Weakley was on his way to a rewarding career.

From Advanced Micro Devices in Austin to Intel in Albuquerque, much of his career involved maintenance for semiconductor companies. Weakley would wear the hooded disposable coveralls known as bunny suits that were required to work in clean rooms.

He found fulfillment in getting systems up and running again.

“You come to a machine that’s been down for two or three days, and nobody’s been able to fix it,” Weakley said. “They call you in, and you can get it back into production. That’s pretty satisfying. You have a sense of satisfaction that you don’t get in some jobs.”

He discovered a love for education in a roundabout way.

“That was kind of where it blossomed,” he said. “I like teaching.”

“I built a trainer similar to the ones in the lab at TSTC, and I started training people in my office on electronics and electrical stuff,” Weakley said. “I would hire operators who I thought would make good technicians. Bring them on, give them training when we got a chance, and turn them into maintenance technicians.”

Now, Weakley has the opportunity to train TSTC students for a lucrative career in the industry.

While Weakley had to work his way up in his career to reach a certain level of pay, maintenance technicians these days enjoy excellent starting pay.

“They’re going into very good salaries immediately as soon as they get out of here,” Weakley said of TSTC Industrial Maintenance graduates. “It’s the law of supply and demand. Employers need their machines fixed, and we have the guys that can do it.”

TSTC’s campus in Fort Bend County offers an Associate of Applied Science degree and several certificates of completion with mechanical specializations in Industrial Systems. The program is part of TSTC’s Money-Back Guarantee, which refunds tuition to participating graduates who are not hired in the field within six months of earning their degree.

At 41,180, Texas employs the highest number of industrial machinery mechanics in the nation, according to the U.S. Bureau of Labor Statistics. The Houston-The Woodlands-Sugar Land metropolitan area has the highest employment level of these positions in the country.

Industrial machinery mechanics can earn an average annual salary of $57,600 in Texas, according to onetonline.org. These positions are forecast to grow by 13% through 2028, the website states.

Registration for the fall semester at TSTC is underway. For more information, visit tstc.edu.