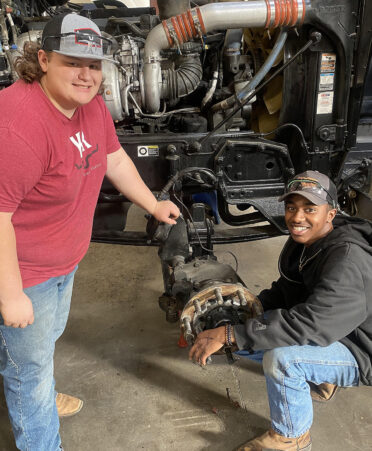 (SWEETWATER, Texas) – Alaijavon Johnson and Trevor Milton learned that they have at least one thing in common.

The Texas State Technical College Diesel Equipment Technology students were influenced by their grandfathers to work in the diesel engine industry. Both are studying for a certificate of completion in the program with plans to open their own businesses.

“I would pretend to drive them and play in them all of the time,” he said. “It clicked that this was something I wanted to do as a career. I enjoyed hearing the trucks start up and really have enjoyed driving them.”

Milton’s grandfather drove an 18-wheeler, taking his grandson along for rides. Milton’s interest in repairing engines and other things led him to a career in diesel mechanics.

“My grandfather would let me ride along and it got me hooked on diesel trucks,” he said. “I have always wanted to learn how to work on them.”

For that reason, Milton said TSTC was the perfect fit for him.

“My mother’s friend had a nephew who attended TSTC and told me so many good things about it,” he said. “It is pretty close to my hometown (Lubbock), which made the decision easier.”

Johnson said he knew that TSTC would be the best option after touring the campus while attending Abilene High School.

“I had a friend who came here and told me so many things about the program,” he said. “I scheduled a tour and talked to the instructors, knowing it would be the place where I could learn a lot about engines.”

Both students are in their second semester of the program and quickly found out why TSTC graduates find employment.

“Our instructors give us all of the tricks we need to be successful,” Johnson said. “They are teaching us to work smarter rather than working hard and fast.”

“We have been taught that speed comes with experience,” Milton said. “The wisdom the instructors share with us is great. We are told to trust in the process of our work in order to be successful.”

Like many students, Johnson and Milton are looking forward to the engine portion of the curriculum.

With both students looking forward to owning their own businesses, they know their time in the TSTC lab will benefit them.

“I really like being able to work on the trucks, engines and other parts with my hands,” Johnson said. “We all learn so much more by doing it hands-on. The instructors are going to be right there to make sure we are doing it the best way in order to be successful.”

According to onetonline.org, jobs for bus and truck mechanics and diesel engine specialists are expected to increase 14% in Texas by 2028. Diesel technicians employed in Texas can earn an annual average salary of $49,810, the website stated.

Diesel Equipment Technology is offered at TSTC’s Fort Bend County, Marshall, North Texas, Sweetwater and Waco campuses. It is part of TSTC’s Money-Back Guarantee program. If a participating graduate does not find a job in their field within six months of graduating, TSTC will return their tuition in full.