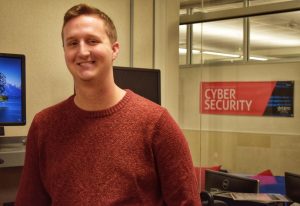 Short, a Cybersecurity student at Texas State Technical College’s East Williamson County campus, has dyslexia and attention deficit hyperactivity disorder. He is reaping the rewards of his hard work as a candidate for graduation at TSTC’s Fall 2019 Commencement at 6:30 p.m. on Friday, Dec. 6, at the East Williamson County Higher Education Center in Hutto.

“I like the feeling of getting over certain milestones,” Short said. “I have had to really push myself to do what I need to be doing. I struggle some.”

Working in the technology field runs in Short’s family. His father works at Cisco in Austin and his brother is a network engineer.

“I feel really confident with what I know,” Short said.

“Nick has made my job easier,” he said. “Nick will go wherever he wants to go. He is confident in his abilities.”

Short was home-schooled and attended public school until going to college.

“In eighth grade, I had a third-grade reading and spelling level,” Short said. “At that point, my mother taught me to push through it.”

He attended another two-year college in the Austin area before enrolling at TSTC, which he chose because it offered the program he was interested in and was close to home.

“The people I have met are pretty cool,” Short said. “The people here are passionate about getting the material down.”

Short plans to take the Cisco Certified Network Associate certification test in December. After that, he will leave in January for Colorado, where he will participate in a Youth With A Mission Discipleship Training School curriculum focused on film, journalism and photography. Short said he will use the trip as an outlet for creativity and to grow in his faith.

“Six months is a long time taking a hiatus from what all I have been doing, but I’m looking forward to it,” he said.

Short also wants to pursue a bachelor’s degree and work in the security field in the Austin area in the future.