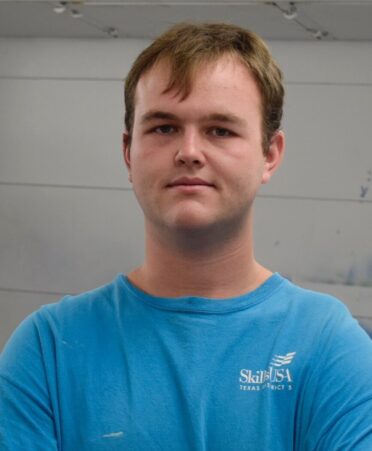 (WACO, Texas) – Travis Hanson, of Mabank, is leaving Texas State Technical College not only with two associate degrees, but also with a recognition highlighting his work ethic and drive to succeed.

Hanson received the Mike Torres Jr. Leadership Award at TSTC’s Fall 2021 Commencement held Saturday morning at The BASE at the Extraco Events Center in Waco.

“It’s awesome,” Hanson said. “It makes me feel like I put in the work to get things done.”

Hanson complimented the program’s faculty members for being great at explaining the techniques he can use daily in his work. Now that he has graduated, he will go from working part time to full time as a painter at Slaton Paint and Body in Athens, Texas.

“The point of college is to go out and work,” Hanson said.

Kyle Pokraka, an instructor in TSTC’s Auto Collision and Management Technology program, nominated Hanson for the award. Pokraka said Hanson led by example in his classes, with other students finding themselves working at his pace to complete lab assignments.

“He (Hanson) never runs away from a challenge,” Pokraka said. “He never stops moving forward. He refuses to back down and quit.”

The Mike Torres Jr. Leadership Award is given to honor the memory of Waco native Mike Torres Jr., who taught in TSTC’s Digital Media and Design program until his death in 2005. According to the Waco Tribune-Herald, Torres graduated from Bishop Louis Reicher Catholic High School and TSTC’s Commercial Art Advertising and Integrated Digital Image program.

The award signifies qualities that Torres was known for: courage, honesty and integrity. The award is given each semester at commencement to a Waco campus candidate for graduation who is nominated by TSTC faculty and staff members. It was first given in fall 2011, according to TSTC archival information.