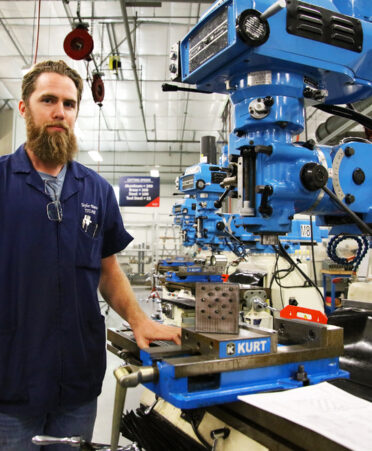 (ROSENBERG, Texas) – Taylor Marze attended a four-year university for architecture, but his disappointment in the program led him to obtain a bachelor’s degree in 3D-focused art instead.

The journey took him down a path of procedure, logic and creativity that eventually led to Texas State Technical College, where he is currently a Precision Machining Technology instructor.

After Marze graduated with his bachelor’s degree, he landed two jobs in Waco: one creating ceramic mugs for a studio, and the other at a makerspace.

“Makerspaces are basically gyms for nerds, and I consider myself a nerd,” he said.

When a TSTC Precision Machining Technology instructor arrived to host a workshop in the space’s machine shop, Marze attended to glean whatever knowledge he could to continue teaching others at the makerspace.

What Marze took away from that workshop shaped the trajectory of his life.

“He told me the pottery I did on the wheel upright is the same as a metal lathe on its side,” Marze recalled of his interaction with the TSTC instructor. “He was influential in that he told me, ‘You need to go to TSTC and take the skill set you have in ceramics and put it into something that’s consistently lucrative.’ And I did.”

As a student at TSTC’s campus in Waco, Marze was inspired by his classmates, many of whom were veterans transitioning to life after military service.

“They’re decisive, they’re slow to act, they’re thoughtful,” he said. “I think I really wanted decisiveness, but I was in my early 20s back then. I had all this frenetic energy, went in all these different directions like a sprinkler. I wanted to find that one direction and go.”

In his later semesters at TSTC, Marze took a machine design class, which is when the art of machining really clicked for him.

“I realized there was a lot more to this,” he said. “This was an art form. There’s a reason why I’m doing this. Art has been a base layer of everything I’m doing.”

After he earned his Associate of Applied Science degree in Precision Machining Technology from TSTC, Marze worked for five years in the industry, first at a small machining shop in Waco, then at a company in East Bernard that made tools for the machining industry.

During the pandemic, the work fell off. So when Marze received a call from TSTC’s Precision Machining Technology department chair asking whether he was interested in teaching at his alma mater, he seized the opportunity.

Being closer in age to his students has helped foster an environment of safety, learning and open communication.

“I’m not somebody scary who’s on a stage professing wisdom,” Marze said. “No, I’m out on the floor with you, and I’m running the same machines you are. That relatability got so much better when I started using what I’m doing as a teaching tool. The thought process, the mentality behind the machining, needs to be shared just as much as the technique.”

Marze also offers his students the opportunity to come and work in the lab outside of regular class hours.

“In my opinion, it’s really encouraging to see somebody be on the machine when they don’t have to be,” he said. “They’re working on themselves.”

Marze is proud to be part of students’ journeys toward obtaining a great-paying, high-demand career.

“This program’s curriculum is going to give students a substantial foundation in the various aspects of the machining industry,” he said. “You can’t go wrong with a good foundation. You get to work on yourself while you’re working on the things that you’re making.”

TSTC offers an Associate of Applied Science degree, two certificates of completion, and an occupational skills achievement award in Precision Machining Technology. The program is part of TSTC’s Money-Back Guarantee, whereby participating graduates will receive a refund of their tuition if they are not hired in their field within six months of earning their degree.

In Texas, computer numerically controlled (CNC) tool programmers can earn an average annual salary of $59,680, according to onetonline.org, which projects such positions in the state to grow by 29% through 2028.

The Houston-The Woodlands-Sugar Land metropolitan area has the fourth-highest employment level of CNC tool programmers in the nation, according to the U.S. Bureau of Labor Statistics.