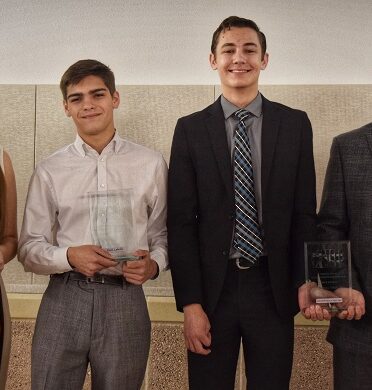 (WACO, Texas) – A student from Midway High School and a team from a Waco private school were the top winners in the 63rd annual Central Texas Science and Engineering Fair held Tuesday and Wednesday at Texas State Technical College.

Midway High School junior Sophie Kearney, 17, along with Live Oak Classical School sophomores Caleb Chakmakjian, 16, and Wyatt Tyson, 16, are eligible to represent Central Texas in the Intel International Science and Engineering Fair in May in Phoenix. Remi Labeille, 16, a junior at Midway High School, was named an alternate.

Kearney participated in the regional science fair in seventh, eighth and ninth grades but skipped doing a sophomore project. This year, her project focused on making better prescriptions so antibiotics are more effective. The project combined her love of science and newly discovered interest in computer programming.

“I cried when I got back to my seat,” Kearney said. “I have looked up to Edward Kim (a former science fair winner and Midway High School graduate) and Remi (Labeille). Making first place is a crazy achievement to me.”

Krystle Moos, a chemistry teacher at Midway High School, advised Labeille and Kearney on their projects.

“They put a lot of hard work in their projects,” Moos said. “They are self-driven kids. They are figuring out problems we don’t even know we have and finding solutions for them.”

Chakmakjian was named a top winner for the second year in a row at the regional science fair. He and Labeille, the event’s other top winner in 2018, represented Central Texas at last year’s International Science and Engineering Fair in Pittsburgh.

And, Labeille had a small part in Chakmakjian and Tyson’s project.

“We went through three project ideas,” Chakmakjian said. “Remi gave us the idea to study a hybrid rocket engine. It’s an honor to be part of the science community. I’m really glad Wyatt gets to experience this.”

Tyson said he looked forward to more work with Chakmakjian.

“I thought it was a good project,” Tyson said. “There is room for improvement. The other projects here were really good.”

There were more than 100 projects from area public, private and home schools. Some of the topics the middle and high school students studied include alternative energy, acoustics, caterpillars, essential oils, fidget spinners and robotics.

The first-, second- and third-place winners in each junior and senior division are eligible for the Texas Science and Engineering Fair in March in College Station.

For more information on the Central Texas Science and Engineering Fair, go to ctsef.org.