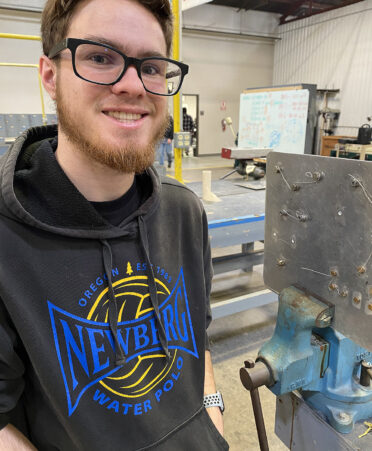 Hoeffliger, who is working toward Associate of Applied Science degrees in both Aircraft Airframe Technology and Aircraft Powerplant Technology, has been happy with his decision.

“I was planning to go to school in Oregon, but it was too expensive,” he said. “I did some research on aviation schools, and TSTC was one of the first schools to come up. I decided to apply and was accepted into the program.”

It was not an easy decision to leave his family behind, but Hoeffliger knows he is getting a quality education.

“I was able to go home on Christmas break, and my parents and little sister are trying to plan a trip to see me,” he said. “My little sister especially misses seeing me.”

Hoeffliger also received support from his employer in Oregon. NAPA Auto Parts allowed him to transfer to work in Abilene in order to attend school.

“They were great in allowing me to transfer and work in Texas,” he said. “Having a job is something I would not have to worry about.”

Instructor Dave Doughty said having a student from out of state is nothing new.

“We have students who commit to our program from other parts of the country, like Oklahoma and Louisiana,” he said. “This has been my first semester with Fred, and he is working hard on the assignments. He is committed to doing the work and learning everything he can.”

Hoeffliger said he has always been fascinated with airplanes, so it was natural that he wanted to make them his career.

“I have always wanted to figure out how the planes work,” he said. “There are so many parts. Since I have been into wrenching because of the time I worked with my dad on trucks, I thought this would be a good career opportunity.”

Not knowing what to expect, Hoeffliger committed to making the best of his decision.

“I did not tour the hangar before applying. I just committed myself to coming to school here,” he said. “It has been the best decision ever since the first day of school.”

He quickly made friends in the program, thanks to the teaching style of each instructor.

“The instructors have helped us by having us work together,” he said. “It was really easy to form friendships in the hangar.”

Now in his second semester, Hoeffliger has learned that airplane engines are more complex than he thought. Having the hands-on learning experience in the hangar has helped him learn how the engines operate.

“There are so many safety features in a plane’s engine that the odds of a crash are not high,” he said. “It has been said that you have a better chance of being struck by lightning than crashing in an airplane. I do not know if that is true, but I want to work to make sure the engines are safe.”

Hoeffliger is looking forward to additional learning experiences in the lab, including the turbine engine curriculum.

“I cannot wait to see what they have in there because it is such a complicated system,” he said.

Although Hoeffliger does not have definite plans for the future, he knows that his TSTC degrees will lead to job opportunities.

“I am working toward a great career and making new friends along the way,” he said.

The need for aircraft mechanics and service technicians in Texas is forecast to grow 8% by 2028, according to onetonline.org. The average salary for these technicians in the state is $66,260, the website showed.