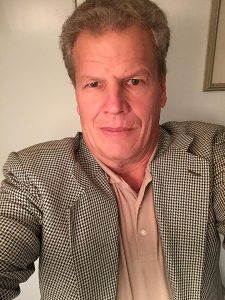 Ott credits TSTC staff for pushing him to finish college

“Everybody at the Brownwood campus was on my side,” said the 2015 graduate of the Chemical Dependency Counseling program. “The passion that was there from my instructor Elizabeth Jones, Raquel Mata (associate provost) and Brian Kight (former associate vice president of enrollment) kept me going.”

Ott, who is now a counselor at Corpus Christi’s South Texas Substance Abuse Recovery Services (STSARS), did not consider college or a career in counseling others. An injury on a construction site in Brownwood and being sober for several years led him to TSTC.

“I kind of stumbled on the school and program,” Ott said. “Without my injury, I would not have gone to college.”

Ott was in Brownwood at the time of his injury and knew the counseling program would be a good fit for him.

“I have always enjoyed helping people,” he said. “I knew that being 22 years sober meant that I needed to try and help people.”

While he did have ups and downs at TSTC, Ott said Mata always helped him with writing assignments and Jones offered support when he was down.

“Raquel would always stay after hours to help me with an essay. She looked over it and told me that I was learning to get it right,” he said. “She stayed way beyond her work hours to help. Mrs. Jones could have gone home, but she stayed to make sure the work was done correctly.”

Mata, who was an instructor when Ott was a student, saw his battle to finish school.

“Even though there were times when he said he wanted to quit, I don’t think he meant it. He was just frustrated, but he kept coming back,” she said. “I know my fellow employees, like Brian Kight, Tammy Vassar and Elizabeth Jones, challenged him to continue.”

After he graduated, Ott began a counseling career. Even that took a nudge — from his brother Bruce.

“He asked me after I graduated why I did not send resumes out,” Ott said. “I had a fear of not being hired. My brother told me after about three months that it was not time to waste my education. I sent out my resumes and was hired.”

Ott left his first counseling job and returned to construction. However, he still wanted to help people and was hired by STSARS, where he has been employed for the last three years.

He said one thing he likes to talk to his clients about is being grateful. While many wonder what he is talking about at first, they understand by the end of the session.

Ott said his goal for the sessions is to be uplifting. He wants his clients to see a path forward.

“I can’t take credit for their recovery. I have to guide them and let them know I am proud of them,” he said.

Mata remains proud of Ott’s journey and has a reminder on her office wall.

“I consider Joseph a true success story. He graduated during our 50th year, when students were given stoles and encouraged to keep or give them to someone who helped them on their journey,” she said. “He showed up to campus one day and said he wished he could cut this into pieces and give us each a section. It still hangs on my wall today and reminds me of what hard work and determination can accomplish.”